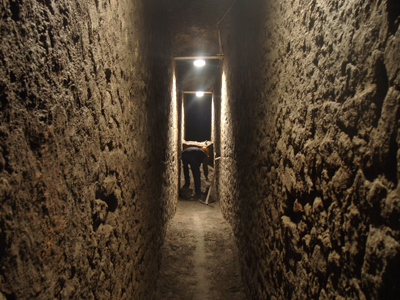 Should you be caught in a heavy rain storm in modern Ercolano, you will understand why the local residents talk about ‘lava’ flowing through the streets. The town sits at the foot of Mount Vesuvius, directly in the path of the rain water as it streams down from the mountain to the sea.

The local community are all too aware of the volcano looming over them and can see parallels between the torrents of water and the lava that may one day inundate their town. The Mayor of Ercolano knows that the drains cannot cope with the amount of water that regularly falls, and has joked that their Roman archaeological site has a better drainage system than the modern town above. The Mayor’s comment is not just frivolous, recent work by the Herculaneum Conservation Project has meant that for the first time in almost 2,000 years the ancient Roman sewer system is ready to flow once more…

The Roman city of Herculaneum, which lies on the Bay of Naples in southern Italy, was buried by the eruption of AD 79 that destroyed Pompeii, Stabiae and other smaller settlements around Vesuvius. Excavation by tunnel started at Herculaneum in the 18th century, but the major campaign of open-air excavation took place under Amedeo Maiuri between 1927 and 1961. At the time, Herculaneum was an ahead-of-its-time experiment in excavation, restoration and presentation to the public, but after Maiuri’s departure, and with changes to the maintenance system, Herculaneum began to suffer.

Water is one of the main problems for any archaeological site: both rain water and ground water. This is because most parts of an ancient site were originally interiors and never meant to be left exposed to the weather – delicate features like wall paintings would originally have been safely shielded by roofs. In addition, the owners are no longer around to take care of their homes, carrying out small repairs and DIY on the weekends to ensure that small problems do not grow into large liabilities.

When the Herculaneum Conservation Project team first arrived in 2001, many areas of the site filled with water every time it rained. Groundwater and the malfunctioning drainage system in modern Ercolano brought a steady seepage of water through the archaeological remains. This water damage made itself felt by eroding masonry and bringing salts out of walls – a sign of rising damp that is traumatic enough in your own home, but can be disastrous on an archaeological site. The problem has been tackled at Herculaneum thanks to the contribution of various specialists who have collaborated to restore the site and solve the underlying problem. To the archaeologists’ delight, this has brought about some exciting new discoveries.

When Vesuvius erupted the Roman city had an efficient system of water drainage based on under-street sewers. An inspired suggestion for resolving Herculaneum’s water problem was to bring the network back into operation by excavating the ancient sewers and reopening the conduits that drained the individual houses.