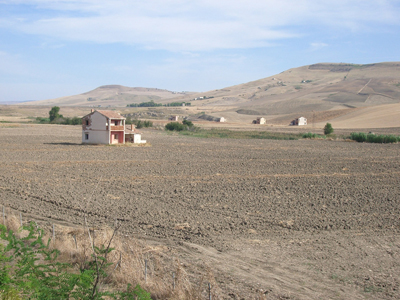 The convulsions in land use that usher in the post-Roman period are vividly laid bare by the Vagnari survey. In the 4th and 5th centuries, pottery distribution on the Imperial estate undergoes a fundamental change. Instead of clustering at the tilery and villa sites, there is a denser, more widespread scatter of Late Roman painted wares. Approximately 55 sites in the survey area have produced pottery of this period. It is tempting to see this as a sign that the Imperial estate was broken up into smallholdings taken on by tenant farmers. This burst of intensification, though, does not endure, and no pottery has been identified to span the ‘Dark Ages’ between the 7th and the 12th centuries AD.

It is not until the Middle Ages that activity revives. Fieldwalking revealed the existence of a Medieval village on the northern part of the San Felice plateau, presumably the very settlement whose name lives on in the modern landscape. The pottery scatter is quite sharply demarcated, and a resistivity survey carried out by John Hunt has revealed indications of a wall and ditch that demarcated the village: the only sign of defences on the hilltop.

The settlement on San Felice is possibly alluded to in an 11th-century document. The village certainly existed in the 12th century, as field walkers recovered two silver coins and one gold one – astonishing finds for a surface collection – datable to the reigns of the Norman kings William the Bad (1154-1166) and William the Good (1166-1189). The presence of proto-majolica pottery suggests that the settlement survived into at least the 14th century. However the ceramic scatter tails off in the 14th and 15th centuries, hinting that the San Felice villagers either perished in the Black Death, or succumbed to the appalling civil troubles that blighted South Italy in the late Middle Ages.

Thereafter, life was dominated by the drove road that served as a conduit for the vast flocks of sheep shepherded from the lowlands to the uplands in spring, and back in the autumn as part of the seasonal transhumance. In the 16th and 17th centuries, a new regime was introduced, and the masseria, or agricultural station, that gives Vagnari its name was established. Owned by a well-to-do landlord, this provided barracks for the casual labourers (braccianti) brought in to gather the crops at harvest time. Nearby was a station called La Cattiva (the Bad Woman!), for large scale sheep ranching. Both are now derelict, and roamed by night watchmen. The Riforma Agraria of 1953 spelled the end for this way of life, establishing instead small clusters of houses. These, however, did not catch on. The individual plots are too small to farm economically, while the hamlets are too strung out to form proper communities. A few houses have found a new role as holiday homes for the inhabitants of Gravina.

Today the land is given over to massive grain cultivation carried out by agro-businesses buoyed up by European Union agricultural subsidies. But how long will it be before the fertility of the land is exhausted, the subsidies come to an end, and the next chapter of the story emerges?