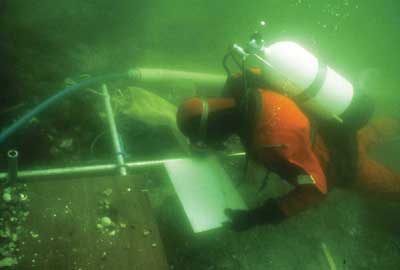 Eight thousand years ago, the sea-level began to rise at an alarming rate in parts of southern Scandinavia. This phenomenon, known as the ‘Atlantic Transgression’, was caused by the remaining ice that melted from the last glaciation in combination with tectonic changes on the earth’s surface. In parts of this area, the water-level rose a massive 30 to 40m within approximately a thousand years. This ‘trapped’ large amounts of well-preserved Stone Age sites in anaerobic conditions. Lately, archaeologists have been paying closer attention to engulfed sites, both in Scandinavia and across the globe. A new Stone Age world has been emerging from beneath the sea – a well-preserved world consisting of settlements and ghostly landscapes submerged during the seas’ phases of rising water level.

In 1972, the Langelands Museum in Rudkøbing on the island Langeland Denmark, became one of the world’s first museums to undertake systematic survey and registration of underwater settlements, aided by local sports-divers. The Museum’s archaeologists focused on the local area, and by 1976, they had begun excavating the shell-midden (a shell rubbish-dump left by humans) known as Møllegabet I, which lay 2m underwater.

In 1990 Langelands Museum (with Jørgen as its Director) decided to carry out systematic excavation of a part of Møllegabet II, the 7000 year old settlement surface that had been located the previous year. However the investigations had to be abruptly revised.

The first dive revealed a Mesolithic dugout boat made of lime wood which had become exposed on the bottom of the sea due to erosion caused by a passing ferry-line. The boat had to be rescued before it would be destroyed totally.

Immediately it transpired that this was not simply a boat, but a boat that had been used as a coffin. We discovered a number of skeletal fragments in and around the boat. These were the remains of a young man; though parts of his skeleton had been eroded away and all that remained was the back section of his pelvis (specifically: his sacrum with associated caudal vertebrae), a large fragment of a skull replete with healed up axe-scar on its right side, a right upper arm, a fragment of right hip, a broken right thigh bone, a right shin bone, a number of rib fragments and a finger bone. It further appeared that a piece of bark was used to cover, or wrap, the dead body.

The boat was worn-out and had traces of burning. Around it were a number of solid hazelstakes. These may well have been erstwhile supports for the boat, which clearly served as a coffin, and calls to mind the burials ‘on trees’ or on poles by hunter-gatherers in Siberia, North America and other places.

We also uncovered several likely grave goods, notably a whole roe deer antler and two severed parts of red deer antlers laid with the boat. A small intact bow, which probably served as a fire-drill or a toy, lay near to the grave. Still embedded in the soft sea bed sediments just outside the excavation of the grave was an end-fragment of a typical Late Mesolithic bow measuring 30cm long. In addition, we found the boat’s paddles – one in good condition, the other in fragments. Were these left for the deceased to row himself to the afterlife?

In 1993, we carried out a full excavation of the Mesolithic dwelling pit over a five week period. But how to dig settlements under water? We modified the methods we would use for land excavation – and added in some special methods to suit our underwater campaign. We excavated in squares a quarter of a square metre and in layers of 5cm, which enabled us to register the positions of all finds. The top levels of all layers as well as the bottom of the lowest were drawn in 1:10. We then levelled all layers and other features of importance with an air-filled garden hose.

We carried out the excavation using injectorpumps. These pumps created a very convenient vacuum for fast, efficient, yet still careful excavation by ‘vacuum cleaning’ the settlement layers that contained large amounts of organic objects. The discharge-nets had a mesh-size of a few millimetres which let the sediment through but withheld even the tiniest millimetre-small objects, thus sifting the material efficiently.

It turned out that the dwelling pit was just over 5m long (E-W) and 3m broad (N-S). After the Stone Age people had dug their pit, they infilled its northern half, which then served as a raised-up platform. The entrance of the dwelling pit was at the western end. This would once have faced onto the water, giving the inhabitants a rather good sea-view of the shore, which would have then been only a couple of metres away. The front of the platform was stabilised with a bundle of cloven hazel branches and its surface was covered by a layer of bark pieces and, most probably, brackens of which remains were found. The bases of four wall-stakes, no doubt to hold up the roof, were still standing, and a fifth stake appears to have fallen outwards from the southern wall. The bases of two internal stakes were found standing in line with the front of the platform. Two hearths were set into the floor to the east of each of the two internal stakes.

Aside from revealing a picture of life, the Møllegabet II dwelling helps to answer one old conundrum. Archaeologists have long puzzled over the appearance of large amounts of flint inside supposed dwellings from the Mesolithic. Was it possible that flint-knapping was carried out inside the dwellings? Did the inhabitants really sit and walk on large quantities of razorblade sharp flint-waste in their homes?

Here we have the answer: on the floor beneath the platform, we found two well-organised flint-knapping zones that coincided with two zones containing tiny arrow points (microliths). However, the flooring of packed oak-twigs would have absorbed all of the sharp pieces, while the platform was kept relatively clean from organic and lithic waste.

Møllegabet is not the only underwater site with exceptional preservation in the vicinity of the Langeland’s Museum’s working area, around Rudkøbing. Immediately west of Rudkøbing is a large basin, which sports Mesolithic and Neolithic sites and even a Neolithic long barrow, that became submerged around 4500 years ago. Moreover, the good preservation is not restricted to settlements. There are also extensive areas with fallen forest from different phases of the Stone Age. The sea bed still supports standing tree stumps and fallen trunks. Indeed, there is an area with fallen forest about 7000 years old just near Møllegabet. Langelands Museum is dendrodating some of the oak. And so far, the largest trunk sent for dendro-dating is 16m long with a diameter of 60cm at the root-end.

Previously, the old land-based peat-bogs of northern Europe provided a possibility for studying Stone Age sites within the frames of larger well-preserved environmental entities. However, taking into consideration the damage to these bogs by the 20th century’s industrial peat exploitation and agricultural drainage, it is clear that our major research potential today is located under water. And we Scandinavians are not alone in this, this period bears witness to global sea-level changes that trapped and preserved numerous Stone Age coastal sites across the globe. Archaeologists throughout the world are revealing a submerged cultural heritage that is set to play an increasingly important role in archaeology. Now, underwater archaeology is no longer limited to ship-wrecks and harbours, but is revealing whole landscapes and offering privileged views onto ancient lives. It is likely that the submerged Stone Age landscapes are going to dominate the future of maritime archaeology.