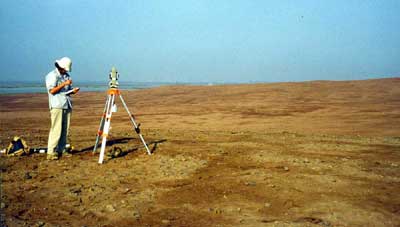 The Nile Delta lay at the heart of Ancient Egyptian civilization. But what remains? A major archaeological survey by the EES is documenting the Delta’s sites. Project directors Jeffrey and Patricia Spencer explain. The fertile Nile Delta of Northern Egypt boasts such a vast number of ancient sites that the names of many – if not most – are unknown to even the most dedicated Egyptologist. These are the lost remains of the cities, towns, villages and cemeteries of the ancient Egyptians. As is still the case today, the Nile Delta was Ancient Egypt’s highly urbanised economic centre. Despite this, it has been relatively unexplored archaeologically.

Thus the aim of our on-going Egypt Exploration Society (EES) Delta Survey is to surface-record as many of these sites as possible – before they succumb to the ravages of time and Egypt’s population explosion. This project is adding vital new information since many scholars have in the past shied away from such sites. Attention has tended to focus on Egypt’s impressive and well-preserved stone temples and tombs, such as the pyramids at Giza, the temples at Luxor, or the splendid rock-hewn tombs in the Valley of the Kings. All were elite monuments, designed for funerary or religious purposes, and all were intended to last – as the hieroglyphic texts tell us – ‘for eternity’, hence the use of stone for their construction.

In contrast, virtually all secular buildings in Egypt, from the humblest dwellings to royal palaces, were made of sun-dried mud-brick and are therefore not as well preserved as the stone funerary and religious monuments.

From temples to pot scatters

It is such secular or everyday material that we are now plotting and surveying. The Delta Survey started as a personal project of one of us, Jeffrey Spencer, some 30 years ago. At that time, Jeffrey plotted on a map of the Delta the locations of as many ancient mounds as could be identified, either from published sources or from personal visits. In 1997, the project was adopted by the EES and has since been published on our constantly-updated website. Currently, we have listed and described over 750 Delta sites on-line.

Some of these are major sites, once regional capitals and homes to important temple complexes, sites such as Tanis, Bubastis, Sais, Athribis, Tell el-Balamun, Tell ed-Daba/Qantir and Buto. All these originally had temples that approached the magnificence of those in the Nile Valley, such as at the wonderful site of Luxor. However, the Delta temples had the misfortune to have been built mainly from limestone, rather than from sandstone like their southern counterparts. The limestone blocks were removed from the Late Roman Period onwards for reuse either in other buildings in a part of Egypt where stone is scarce, or to be burned to make quicklime. As a result, only hard stone elements of the temples sometimes remain, as at Tanis and Bubastis.

Most Delta temples have been reduced to their foundation level, leaving little to attract early archaeologists or for visitors to see today. These major sites, although included in the Delta Survey, do not feature prominently as they have been extensively published elsewhere. Instead, our focus is on the hundreds of other Delta mounds that were once the towns and villages of ordinary Egyptians. But how do we go about this?

Since we are carrying out a survey, we do not excavate; rather we record the locations of sites, estimate their extent, describe the degree of preservation, and the nature of any surface material – ancient building traces, small objects and, predominantly, swathes of surface pottery. We then estimate the date and also give bibliographical references to any publications; we also glean information from our colleagues and a variety of other sources.

Over the years, we have made many site-visits. Sometimes our excursions have been reassuring, as when we identify a little-known site and can record valuable information about it. Or they can be rather depressing – particularly when we discover that an ancient site has been destroyed or completely overbuilt. Modern Egypt has a growing population with many needs that can only be met by building on ‘waste’ ground and in the Nile Delta – this can mean building on ancient sites.

As a consequence, our Survey has a sense of urgency since it is recording a fast-disappearing past. One of our major goals is to identify sites at particular risk and to take their investigation further by carrying out detailed surveys and, if necessary, rescue excavation.

Among the major excavations that have arisen from our survey are those at the royal city of Sais, as illustrated in the next feature. Other fruitful work that has come out of the Delta Survey includes our project at Tell Belim, a mound almost completely cut off by fish-farm lagoons in a desolate landscape. Getting there was an adventure in itself: we had to drive very slowly, lest we skid off the narrow dirt roads built on raised dykes that ran through the lagoons. Once we arrived at the mound, we were rewarded with a most promising site, 1km in length. Its surface had visible outlines of ancient houses and a temple-enclosure. This visit was followed up with a mapping survey in 2000 and some rescue excavation in 2002.

A further advantage of carrying out such a wide-ranging survey is that settlement patterns can be identified that were not previously known: dwellings that lay along branches of the River Nile that are now extinct or have been canalised since antiquity – not just along the two that still exist and flow into the Mediterranean Sea at Damietta and Rosetta. We have also observed distinct areas with far fewer sites, which may have been uninhabitable zones of marshland or lagoons. The Survey is thus proving to be a useful tool for recreating the ancient environment in the Delta and for understanding everyday settlement distributions.

Since this started as a personal project, most of our work had been carried out with minimal costs to the EES. However, in 2007 we felt that it would be valuable if the Delta Survey had some funding to enable further work to be undertaken on small but nonetheless important sites. Therefore, Jeffrey made an application to the British Academy for the Delta Survey to be adopted as an ‘Approved Project’, a status which brings with it a small annual grant.

The first of this British Academy funded work began in March 2009 with our geophysical and surface survey of the threatened site of Yetwal wa Yuksur in the north central Delta. The survey work should take two seasons, with a second planned for 2010. This site has never been systematically investigated but is known thanks to an accidental discovery in 1907 of part of a basalt sarcophagus.

The fragment belongs to the mother of King Nectanebo II – the last native Pharaoh of Egypt – who reigned from 360-343 BC. Scattered on the surface of the site at the present day are numerous blocks of red granite, perhaps remains of an ancient temple or of a Coptic church. Our magnetic survey has so far mapped over four hectares and revealed outlines of several large buildings of rectangular shape, with walls almost 3m thick.

Thus from its very small beginnings, the Delta Survey has grown to be a useful resource, not just for the EES, but for all researchers interested in working in the Nile Delta. Through this work we can build up a picture of settlement patterns and the environment in which the ancient Egyptians lived. As a continuously updated online publication, information can, and will, be added as soon as it is obtained so that, unlike a conventional print publication, the resource will never be out-of-date. In the short term, there are threats to ancient Delta sites, as described above, but in the longer term there is a real challenge to the whole of the northern Delta from the effects of climate change and a potentially disastrous rise in sea levels which could destroy both modern villages and ancient sites.

The EES first pioneered fieldwork in the Nile Delta over 125 years ago; now our survey is documenting a wide spectrum of ancient human settlements. It is important that this work continues, to rescue as much information as possible on the towns and villages of the ancient Delta before it is lost forever.