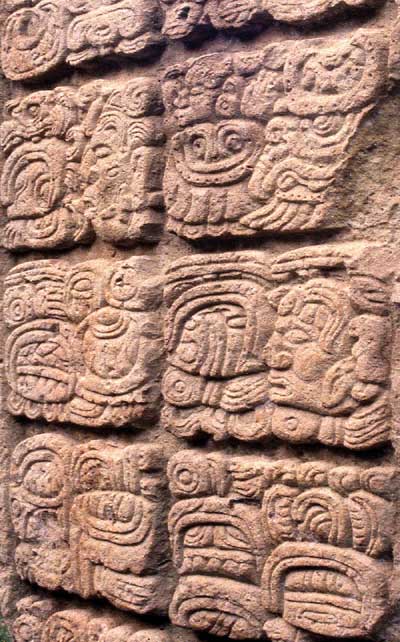 The decipherment of a lost script is always a landmark in the study of the civilization that created and used it. Recently, the beautiful yet strange designs of the ancient Maya script have been successfully read.Cracking the Maya code is significant since it is the only indigenous record for the pre-Columbian New World. The hieroglyphs are now able to tell us much more about Maya society and culture, and are a powerful partner to the archaeology, as Simon Martin reveals.

Ancient Maya civilization emerged in a tropical landscape that today covers the southern part of Mexico, the whole of Guatemala and Belize, and parts of Honduras and El Salvador. Producing major settlements from about 500 BC, the Maya experienced cycles of florescence and decline that were only brought to a close by the Spanish invasion of the 16th century. The heyday of the Maya script came in the Classic period spanning AD 200-900, when a great many texts were carved on tall limestone monuments set in the heart of the most important cities.

Speaking of the major ruins of Copan, Honduras, in 1841, the explorer John Lloyd Stephens said: One thing I believe, [is] that its history is graven on its monuments. No Champollion has yet brought to them the energies of his inquiring mind. Who will read them? The answer, for almost 150 years, was no one.

The daunting complexity of Maya hieroglyphs—their beautiful but strange designs, their elaborate fusions of figural and abstract elements—thwarted the best efforts of scholars drawn to the problem. There was considerable progress in understanding the intricate cycles of the Maya calendar, which proved to dominate many monuments with exhaustive computations of dates, but the remaining content proved stubbornly obscure.

Over time, these failures took their toll and the field developed a deep-seated pessimism, many believing the task impossible. This gloom had another effect, as Mayanists turned away from Stephens’ prediction of hidden histories; coming to the view that whatever the hieroglyphs encoded, it was hardly worth knowing. By now, the Maya were conceived of as pacific time-worshippers governed by a priestly elite. The hieroglyphs were not writing in any true sense of the word, but an ad hoc system of ‘ideograms’, riven with metaphors and puns. They acted as a mere aide memoire from which the priestly elite spun their incantations and mystical musings. There was no history here, not even the names of people and places.

Yet research from a number of different people and parts of the world ultimately led to the collapse of these ideas and, over the past 30 years, to the breaking of the Maya code. The project remains incomplete—a fair number of the 600 plus signs in their system remain to be deciphered—but we can now read Maya texts to a degree unimaginable only a generation ago.

Tatiana Proskouriakoff was the outstanding researcher who swept away the theocratic image of the Maya elite and their supposed lack of interest in historical records. Concentrating on a single site, Piedras Negras, Guatemala, which the University of Pennsylvania Museum excavated between 1931 and 1939, she examined chronological patterns and their relationships with particular glyphs. She noticed that the dates within any particular group of monuments never exceeded a normal human lifetime. Additionally, she realised that a distinctive hieroglyph was always associated with the earliest date in any group, while another was always joined to a date that instigated the first monument in the group. She suggested that these signs marked the birth of a ruler and his accession to power respectively. In so doing, she identified the enthroned ‘idols’ on the face of these monuments not as gods but kings, and the robed figures that attended them not ‘priests’ but queens. Published in 1960, her study had changed the field of Maya studies overnight.