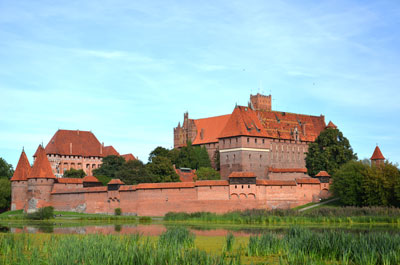 For God or for Mammon?

The 13th-century Northern Crusades not only converted the local tribes from paganism to Christianity, they also converted the landscape from dense forest to open farmland. Were these men of God intent on saving souls or plundering natural resources? Lisa-Marie Shillito looks for answers in the archaeological record.

When we hear about the Crusades, we immediately think of Richard the Lionheart and Saladin, the Knights Templar and the Hospitallers, and the relentless religious battles during the 11th to 13th centuries to restore Christian access to the Holy Land in and around Jerusalem. But the Crusades were also waged much closer to home, in the Baltic region of Europe.

In the 13th century, the Teutonic Order – a military order that formed at the end of the 12th century in the city of Acre – led crusading armies on a holy war against the indigenous societies who occupied the eastern Baltic region, intent on replacing these tribal territories with new Christian states. The Northern (or Baltic) Crusades were, in a way, more successful than their better-known Middle Eastern counterparts, transforming most of the diverse pagan cultures with the introduction of Christianity to create the basis of the Europe we know today. But what of the Crusades’ environmental impact? Did they effect a shift in the exploitation of natural resources in the Baltic region?

Understanding environmental change is a useful tool for understanding socio-cultural change. The provisioning of natural resources for food, fuel, and building construction is a key factor in the success or failure of colonisation in frontier regions. Many aspects of the natural world were sacred to the indigenous Baltic tribes, and so the environmental impact associated with the Crusades can be directly linked to the cultural changes that created a new European world at the frontier of Medieval Christendom. It is here that archaeology plays a major role.

From an historical perspective, the events of the Northern Crusades are well documented and understood, including the names and dates of the political and economic events, as well as the military strategies and key figures. Historical sources, however, are limited to those events and activities that were deemed worthy of recording by people in the past, and the indigenous populations of the Baltic did not leave any written sources.

Therefore, we must rely on archaeological evidence from the material culture and day-to-day debris of these societies to give us an insight into different aspects of the era and of the environment in which these events played out. Plant remains preserved by charring, animal bones, and even chemical residues preserved in buried latrines and rubbish dumps provide diverse information not only on the past landscape but also on how it was being exploited.

What is also interesting is how and why these new Medieval societies in the Baltic developed and prospered at a time when much of the rest of Europe was suffering pandemics of disease, famine, and social crisis. The management of the abundant natural resources in the Baltic, such as fur-bearing animals and timber, could be a key factor in understanding this dichotomy.

Digging up castles
The archaeology of Crusader sites in the Baltic is dominated by the castle. The construction of castles and their associated towns was a major feature of the conquest and colonisation of the territories. Crusader castles performed both a political and religious function, and ranged from large fortified monasteries to small isolated towers. Perhaps the best known – and certainly one of the most impressive – is in Poland: Malbork Castle, or Marienburg as it was called by the Teutonic Order.

The construction of Malbork was completed in the mid-15th century, and today the castle is a designated World Heritage Site. It is not only the largest brick building in Europe, it is also the largest castle in the world, and is considered a masterpiece of Gothic architecture.

From an archaeological perspective, castles provide a major challenge in how to conduct excavation and recovery of material. Many sites have disappeared completely, while others have been continuously occupied and reused over time, and are preserved today as spectacular historic monuments. Malbork, for example, has been rebuilt twice: once in the late 19th and early 20th centuries, and again after the Second World War, during which it had suffered severe damage. In order to get to the undisturbed cultural material of the Middle Ages, we would have to excavate through layers of building rubble and stone as well as layers of post-Medieval archaeology. To minimise this problem, we conduct a geophysical survey prior to excavation, which helps us to identify both buried architecture and those areas of disturbance to be avoided.

Following pilot studies and surveys from 2009 and 2010, two seasons of excavations were completed by the Ecology of Crusading team in 2011 and 2012. Excavations focused on a comparative study of sites in Prussia (north Poland) and Livonia (Latvia and southern Estonia). In Poland, Malbork provides the major case study among a range of smaller castle sites, while in Latvia excavations have focused on Cēsis Castle over the summer of 2011, and Āraiši in 2012.

Among the most abundant finds so far during excavation are the animal bones. Tens of thousands have been recovered from some of the sites under investigation. Perhaps surprisingly, the smaller sites, rather than the big castles, have yielded the most informative animal- bone assemblages. This is possibly because the big castles are more likely to have been continuously occupied for long periods of time, and so archaeological deposits tend to suffer much more from disturbance – very frustrating for archaeologists! On the other hand, the larger castle sites tend to have better documentary sources, hence the importance of bringing together multiple methods and approaches.

The study of animal bones from pre- and post-Crusader deposits can tell us about the different ranges of animal species that were exploited, and also the different ways in which these animals were used and processed. This second aspect, how animals were processed, is sometimes overlooked. Today, people tend to be removed from the process of animal butchery and preparation. Yet our attitudes towards animals and the ways in which the carcasses are treated provide significant insights into food culture and trade specialisation, and can be directly linked to changing tool use, craft specialisation, and ideologies.

There is further complexity involved in looking at castles and comparing them to smaller strongholds and domestic settlements, as there could be subtle differences in exploitation strategies associated with the different numbers of people and functions of the sites. Analysis so far suggests differences between the relative importance of wild and domestic species depending on the location of the sites, with some relying on hunting, trapping, and fishing more than others.

Animals were not only used for food. Skeletons of horses have been recovered from a number of excavations, most notably at Malbork where the spines of the horses show evidence of having carried heavy loads. This clearly indicates that these were military animals, carrying the great weight of a rider in full armour. Last summer at Cēsis, the nicknamed ‘horse trench’ was found to contain six individual horses dated to the Livonian War in the 1570s, most of which appear to have been dumped in an abandoned building that later collapsed, burying them in the debris.

As these are military strongholds, it is perhaps unsurprising that we would find horse remains. However, while fragments of horse bone are encountered regularly at castles, the finding of whole horses is unusual in Medieval contexts.

The horse was a significant beast even before the Crusades. Indeed, it was an extremely important cult animal in pre-Christian Prussia, Livonia, and Lithuania, with diverse evidence of horse sacrifice from the 1st century AD through to the Crusading period.