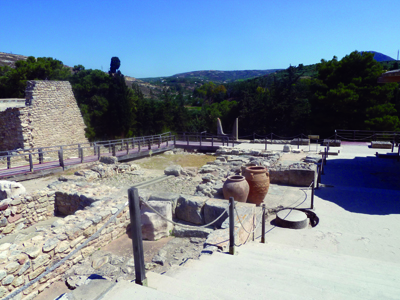 Next time you drop an olive into your martini or toss a handful across a pizza, take a moment to look at this humble little fruit: it was the olive that help kick-start civilisation.

In his 1972 book The Emergence of Civilisation, Colin Renfrew argued that olive cultivation played an important role in this development. Now, new research by Evi Margaritis and Mim Bower at the British School at Athens and the McDonald Institute, University of Cambridge, suggest the proof was grown on Crete. Data from archaeological research combined with new archaeobotanical information demonstrate that olive oil was a product of considerable importance in Prehistoric Crete.

A versatile plant, the olive tree was used for food, fuel, lighting, ritual use, pampering, and trade. It is among the earliest fruit trees domesticated in the Old World: at Teleilat Ghassul, north of the Dead Sea in modern Jordan, olive stones have been found with dates, cereals, and pulses, dating to the 4th millennium BC. As this region is too dry for olives to grow naturally, those found here were likely the products of cultivation, possibly grown under irrigation. If so, it raises the question: were olive trees being domesticated and cultivated elsewhere, too?

The evidence for the earliest use of the olive comes from analysing organic residues found on the interiors of pots. This non-destructive method uses, for example, gas chromatography to detect the chemical signature of olive oil and other contents in vessels that were used for storage, transport or cooking. Using these techniques on finds from the cave of Gerani, near the modern town of Rethymno, revealed that Cretans were using olive oil in their cooking as early as the 4th millennium BC.

But if we want to see the steady growth in importance of the olive throughout the Bronze Age, we need to study the actual remains of the plant themselves. This can best be done by using pollen analysis. Oliver Rackham of Cambridge University and Jennifer Moody of the University of Texas at Austin show there was a substantial presence of olives trees on the west of Crete during the Late Neolithic, before the big take off in the Bronze Age (3000-2100 BC). From then onwards, there are indications for large-scale olive cultivation.

Evidence for this comes from charred olive stones and pieces of charcoal retrieved from archaeological excavations at Myrtos, Vasiliki, and the early levels at Knossos itself, where Jane Renfrew has been studying the archaeobotanical remains.

The big expansion comes in the Middle Bronze Age (2100-1700 BC). This is the time when the sites at Knossos, Phaistos, and Malia are becoming real palaces, and finds of olive stones and olive wood become more numerous. Further evidence comes from the Minoan towns at Kommos and Palaikastro in east Crete, and from rural sites at Chamalevri and Smari. But it is during the period of the palaces that the olive achieves its peak of production. In Crete, the olive becomes the prestige object par excellence, used by the rulers to demonstrate their power and wealth, and thus, inevitably, it was over-produced.

According to Sir Arthur Evans, the first excavator of Knossos, in his seminal study The Palace of Minos, first published in 1935, the storage facilities at Knossos could hold more than 246,000l of olive oil. A good example of this is the conical cup full of complete olive fruit from a well at the palace of Kato Zakros – the smallest of the four main palaces in Crete, discovered and excavated by Nikolaos Platon in the 1960s. The olives in the conical cup survived in the mud at the bottom of a well due to the anaerobic conditions and, according the excavator, were part of a ritual deposit and offering to the gods.