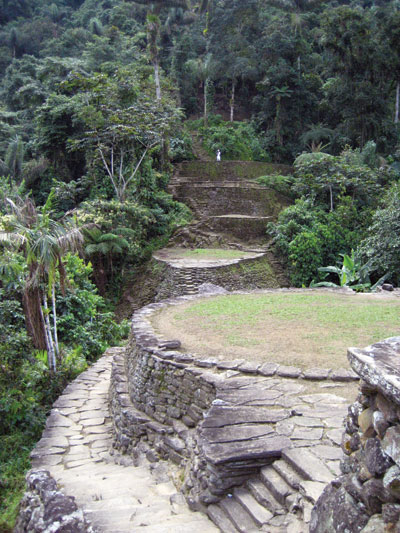 Stunning gold artefacts began to appear in local markets. Rumours filtered through to Colombia’s archaeologists that guaqueros – looters responsible for the destruction of many archaeological sites throughout the Sierra Nevada – were finding Pre-Hispanic objects on a site in the upper Buritaca River basin. The Colombian Institute of Anthropology (now the Colombian Institute of Anthropology and History, ICANH) immediately sent archaeologists to investigate.

It was 1976, and this was uncharted territory. The road disappeared and, for three days, the team trekked through dense vegetation up into one of the world’s highest mountain regions, along Colombia’s Caribbean coast. It is a challenging climb. The difficult and broken topography resembles ‘a badly crumpled piece of paper’, says Santiago Giraldo, Director of the Colombia Heritage Program for the Global Heritage Fund. The potentially lethal wildlife includes snakes and a colourful variety of vicious insects.

Then, suddenly, they came upon an extraordinary and most unexpected sight: a great stone staircase meticulously carved from giant boulders.

The steps led them still higher, until finally they reached huge man-made terraces cut into the slopes and lined with stone. But what surprised the team still more was their shape.

Typically, platforms in the Americas are rectangular in form, defining and confining space. The architecture of the Aztec, Inca, and Mayan settlements – as well as that of the earlier great cities like Tiwanaku in Bolivia and Teotihuacan in Mexico – employs straight lines and hard angles to delineate and sub-divide areas.

Here, however, dwellings and their stone foundations are round, set upon oval-shaped terraces in small groups sprawled across vast areas, linked by curvilinear paths that stretch and wind their way through the site.

These circles with their snaking paths suggest an informality of design, encouraging a constant flow of movement between sections along a complex network of paths, staircases, and walkways.

Remarkably, despite suffering the attention of looters, about 85% of the site was still in a fine state of preservation. It was obvious, too, that this was a settlement of some importance. Its name, however, was long gone. So the archaeologists called it Ciudad Perdida, Spanish for ‘Lost City’.

Finding civilisation
Initial investigations suggested that these round and oval structures were built by the Tairona, an indigenous population who occupied the area at the beginning of the 1st millennium AD, and who disappeared around 1600, shortly after the arrival of the Spanish.

We know that when the Spanish explorer Gonzalo Fernández de Oviedo arrived at the Bay of Santa Marta on the Caribbean coast in 1498, more than 250 settlements were scattered across about 5,000km² of land. Ciudad Perdida, one of the biggest and most impressive of these, was probably the economic and political capital of Buritaca River basin where it is located. The entire site covers approximately 80ha, and at its peak would have had about 2,500-3,000 inhabitants.

The architecture of Ciudad Perdida follows the landscape. It is difficult to tell precisely where the settlement begins or ends. Wooden houses, which have long since disappeared, would have stood upon the packed-earth platforms lined with stone-masonry retaining walls. An extensive network of flagstone paths connected these dwellings, storerooms, and communal buildings with agricultural terracing, canals, reservoirs, and water drainage systems.

Most of the land had been cultivated in neat, well-kept plots providing a diet that included maize, beans, sweet potato, yams, and avocados. Bees were kept for their honey and for their wax – which was used to make moulds for gold objects.

Aside from cleaning up small sections of damaged walls, the first archaeologists on the scene confined their investigations to mapping and recording the area, excavating some of the looted platforms and dwellings, clearing out the site, and preparing it for visitors.

Pottery and some gold and stone artefacts – missed by the looters – were recovered and are now stored at the National Museum and at the Colombian Institute of Anthropology and History.

Finally, in 2010, the Global Heritage Fund (GHF) set up the Colombia Heritage Program – a long term project which includes conservation of the site as well as research and excavation – under the direction of Santiago Giraldo, and in conjunction with the Colombian Institute of Anthropology and History. Giraldo began by examining the terraces.

Unique design
The unusual round and oval structures were formed in one of two ways. Simple isolated terraces were created by cutting a flat cross-section into the slope. The displaced soil and rubble was then used to build up the slope from below, and held in place by several courses of roughly dressed stone. The fill was packed down by trampling, and the flattened surface covered with cobblestones. A course of long, flat stones – between 1m and 2m in length – was then added to the top of the retaining wall so that another cut could be made into the slope above, thereby creating ‘steps’ of terraces.

The exposed flat surfaces were covered with stone to ensure rainwater could be run off without causing erosion, and to provide a stable foundation for the wooden structures built on top. As the population increased, more terraces were added, abutting and intersecting one another, extending up the hillside.

The second, more complex, method was used mainly for the narrower, uppermost areas of the city where the terrain is made up of rocky outcrops. These required retaining walls on both sides, with greater amounts of soil and rubble infill. Large stone slabs were placed in key positions around the outer edges for extra reinforcement. Once the first terrace was finished, it was possible to build subsequent ones, each with their wall resting on the one below.