Archaeologists in Cologne are completing the city’s biggest project of its kind ahead of construction for a new railway network. When it is finished, commuters will buy their tickets and board their trains just metres above the newly discovered remains of a Roman harbour on the former banks of the Rhine, as Alfred Schäfer and Marcus Trier explain. 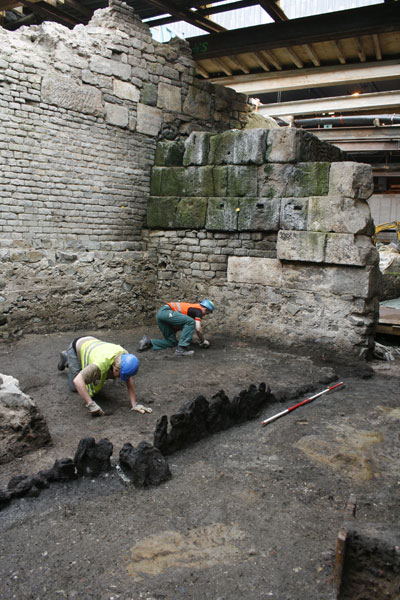 For the past ten years, archaeologists from the Römisch-Germanisches Museum have been digging an area of Cologne destined to become part of the new north–south city railway. The 4km-long (2.5 mile) route runs from the Central Station into the southern part of the city. Most of it lies 20m to 27m (65ft to 89ft) below the ground, safely below archaeologically relevant levels, and therefore of little threat to ancient structures. However, where foundation piles for stations and service access points are required, the building work poses a very real danger to any archaeological remains.

The construction of the north–south railway is a mammoth project, and the associated archaeology represents the most extensive study into Cologne’s buried past to date. So far, the archaeologists, led by Alfred Schäfer and Marcus Trier, have investigated an area of 3ha (7 acres) – roughly the size of four football pitches – and about 13m (43ft) below ground.

Most of the foundations for the modern development lie in a region that once formed the banks of the River Rhine, before it became silted up in the 2nd century AD. Beneath Kurt-Hackenberg-Platz, in the shadow of the magnificent choir of the city’s cathedral – the largest Gothic church in Northern Europe – are the wonderfully preserved remains of a monumental gateway to this harbour. Excavation took place here in 2007/2008 and, with the results now collated, we are confident we will be able to get a clear idea of how this entrance to the city would have appeared  to the local inhabitants from the end of  the 1st century AD.

The gateway beneath Kurt-Hackenberg-Platz is one of five Roman gates that once looked out onto the Rhine along the river section of city wall of Colonia Claudia Ara Agrippinensium (CCAA) – so named after Agrippina, wife of the emperor Claudius, who was born here and who petitioned for the city’s colony status. Kurt-Hackenberg-Platz was built as part of the regeneration project following the end of World War II. It lies on top of an old secondary channel of the Rhine, home to the port that belonged to the 1st-century AD Roman town. The natural harbour basin was about 60-70m (200-230ft) wide and about 1km (0.7 miles) long.

The land to the west rises to form an area of higher ground above the high-water mark on the banks of the Rhine. It is here that the town was originally founded in the last ten years BC; the Roman walls on the banks of the Rhine mark the borders around this section of the old city. The site was clearly chosen by the first settlers for its location above the floodplains along the left bank of the Rhine, looking out towards the channel of the old river and the river island.

Nearly 2m (more than 6ft) beneath Kurt-Hackenberg-Platz, the consortium KölnArchäologie, under the supervision of archaeologists from the Römisch-Germanisches Museum, came across the monumental remains of these fortifications, facing onto the Rhine. A section of the Roman town wall, about 25m (80ft) long, crossed the modern construction pit in a north–south direction. The view from the south side looks towards the town wall and the outlet of the main sewer which ran through the foundations of the Roman gatehouse. The projecting sewer outlet is made up of ashlar blocks of tufa faced by limestone blocks, resting on a foundation of opus caementicium (Roman cement).

The passageway through the ‘harbour gate’ runs over great slabs that cover the sewer. In the Late Roman period, the entrance was sealed with reused worked stones, or spolia.

Clearly, the Roman engineers who designed and built this gateway were exceptionally skilled: the red sandstone blocks in the wall above the slabs covering the sewer are an integral structural element of the tower’s gate jamb. Such high-calibre workmanship would have required a considerable level of technical expertise.

What did the harbour gate at Kurt-Hackenberg-Platz look like? We found evidence of a substructure at the base of the lowest river terrace on the inward-looking face of the city wall that would support a rectangular gatehouse 7.4m (24ft) wide and 6.5m (21ft) deep. Through it would have run the northernmost decumanus – the so-called ‘Harbour Street’. This passageway through the gate measures 2.7m (9ft) between the red sandstone blocks. A manhole cover belonging to a maintenance shaft found during excavation indicates the level of the pavement within the gatehouse. Beneath it, the underground drain flowed along the axis of the street, under the gateway, and into the river from an outlet in front of the town wall.

The plan of the gatehouse, therefore, gives us a clue to its design, enough, at least, for a rough reconstruction, including the height of the tower’s roof – estimated to be about 13.5m (44ft) tall.

The foundations of the Roman town wall were 3m (10ft) wide and 3.2m (10ft 6in) deep, and rested on the firm gravel of the river terrace. They were made up of opus caementicium and covered in greywacke. They lie in waterlogged soil at just about the level of groundwater, and, as a result, the anaerobic conditions have ensured that the foundations’ wooden shuttering has survived in a remarkably fine state of preservation.

Analysis by Cologne University’s Dendrochronology Laboratory established that this shuttering was made of conifer timber; that the trees were felled in the Black Forest; and that they were transported down the Rhine to be sawn to size on site at Cologne. The planks were, on average, about 8m (26ft) long, about 30cm (1ft) wide, and between 3.5cm and 4cm (1.3-1.6in) thick. The width and thickness varies only very slightly, reflecting, once again, the superb quality of craftsmanship of the Roman builders.

A contiguous row of vertical oak stakes along the edge of the riverbank was found in front of the conifer shuttering, situated 4m (13ft) beyond the town wall and parallel to it. It appears, from its stratigraphic relationship with the structure behind it, that this line of wooden stakes was installed to shore up the earth along the waterfront ahead of the construction trench for the Roman town wall. Furthermore, the plank wall, along with additional posts, also served as pile-foundations to support a wooden walkway that ran at the same height as the base of the wall. A ramp comprising fragments of greywacke piled against the walkway apparently served as a quay for the loading and unloading of ships and boats, even when the water was low.

The Dendrochronology Laboratory at Cologne University examined 150 oak stakes that made up a section of the plank wall, and analysis confirmed that all the trees from which they were cut were felled in AD 89.

Of the five gatehouses on the Roman wall along the Rhine, this so-called ‘Harbour Gate’ would have linked the town behind it to the Roman harbour on the river below. Thanks to the slower current in the partially silted Rhine channel, it was ideal for river traffic, and Colonia Claudia became a busy trading hub, importing and exporting a wide variety of goods. This, certainly, is reflected in the huge quantity of small finds found during excavation, including an unusually high number of fragments of Roman amphorae for carrying wine, spicy sauce, and olive oil.

More than 1,500,000 small finds were recovered from the former harbour basin – though much of this included rubbish from the centre of Cologne that had been dumped into the river along its bank. We also recovered the remains of sunken – or abandoned – wooden flat-bottomed boats that, with their shallow draughts and wide hulls, were specifically designed for transporting large quantities of goods along the river.

The ‘harbour gate’, the city wall, and the drain outlet, as well as the wooden walkway along the base of the wall’s outer face, were all part of an extensive building project that included construction of the town’s fortifications in about AD 90/91 – possibly during the rule of Domitian (AD 81-96).