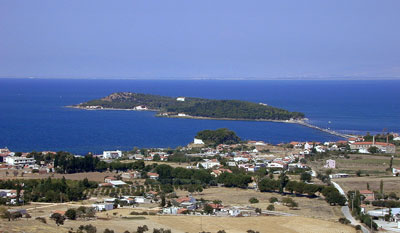 Ionia covers the region along the central part of west coast of Anatolia and adjacent islands. It is also the term used for the political federation of 12 Greek city-states – and the basis of a truly remarkable civilisation that heralded the golden age of ancient Greek history.

Clazomenae, on the south coast of the Izmir Gulf, sat in a prime position to control sea traffic into and out of the gulf as well as around the neighbouring small islands. The settlement dates back to the 4th millennium BC. Excavations here have produced evidence of occupation throughout the Bronze and Iron Ages that are proving an invaluable source of information, opening a window into the domestic lives of its earliest inhabitants.

There are two archaeological teams working here on different areas of the site: Clazomenae is a town of two parts, held together by a long mole that joins the mainland to what was once a small island. The two areas were used at different times. Throughout the Bronze Age, the settlement was on the mainland. During the Hellenistic and Roman periods, occupation was on the island, and the Bronze Age settlement was given over to farming.

Archaeologists have revealed evidence of prehistoric occupation on this promontory at Liman Tepe – contradicting the 2nd century AD traveller and writer Pausanias, who declared that Clazomenae was a lonesome place first occupied by Greek migrants.

Indeed, evidence now suggests it was an important harbour long before the Greeks came onto the scene. In the early Iron Age, these new arrivals came to the former Bronze Age site, settling at Liman Tepe. By the 1st millennium, the site had expanded to form the Ionic city-state called Clazomenae.

Town planning
The early Iron Age town was made up of residential, industrial, and burial areas. A large curvilinear structure – quite likely a household unit – sits at the centre of the settlement, with pottery manufacture and the cemetery relegated to the outskirts of town.

Discovery of the pottery kiln was particularly exciting: it had been preserved in excellent condition and will enable us to learn much about Iron Age technological development. Interestingly, when it fell out of use, the area became an extramural cemetery, and remained in use as such for about three centuries, until the construction of a defensive wall of the Archaic city in the middle of the 7th century.

We already knew that Clazomenae was a major producer of pottery in the Aegean, even before discovery of this well-preserved Early Iron Age kiln. Black-figured pottery from the 6th century BC, decorated with floral designs, animals, mythical beasts, and human figures – sometimes portrayed in scenes from epic legends – have been attributed to workshops here at Clazomenae.

Examples have been found throughout the Mediterranean basin, including South Italy, Southern France, and the Iberian Peninsula, as well as the Ionian colonies on the Black Sea. The style and technique imitates Athenian pottery that dates to the second half of the 6th century BC. The kiln at Clazomenae, however, predates these examples and strongly supports the theory that Clazomenae was, indeed, a major manufacturer of pottery in Ionia.

Expansion and growth
During the Archaic period the settlement expanded towards the west, and in the mid-7th century BC the defensive wall was built. The area with the Iron Age pottery kiln and the burials was then abandoned.

It is here, too, that we find evidence for another major industry that fuelled Clazomenae’s economy: olive oil. Lying next to an ironsmith’s workshop archaeologists recovered the remains of an olive press.

At around 530 BC, the olive oil production must have stepped up a gear. Archaeological evidence suggests that at this time the press was expanded and improved to function as a large installation. The owner clearly invested in cutting edge technology of the day, adding a capstan and enlarging the press bed so that it had three compartments in the separation tanks. This innovation enabled the plant to run continuously, thereby increasing productivity.

Olive oil was a hugely important trading commodity throughout antiquity, one which the citizens of Clazomenae successfully exploited. Amphorae with the simple band decoration associated with Clazomenae would have been used in the transportation of these exports. These amphorae are found throughout the Aegean basin as well as the Black Sea. Such a wide distribution suggests the settlement was one of the more significant players on the ancient trade network.

The 6th century BC olive press has now been totally recovered and, thanks to an experimental archaeology project financed by the Komili Olive Oil Co. in Istanbul, has been restored and put on display.