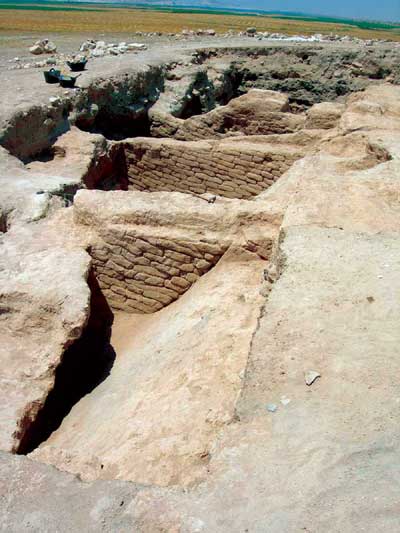 One of the most common questions archaeologists are asked is why they chose a given site for excavation. After all, excavation is a labour of love. It requires hard work under arduous conditions, seemingly endless amounts of funding, and vast reserves of patience and dedication. Is a site the largest in the area? Was it famous in antiquity? Does it offer the excavators a particularly rich or unique insight on the past? People always seem a little shocked when the staff members of the University of Pennsylvania’s Tell es-Sweyhat Project grin and reply: ‘Because Sweyhat is there, (dramatic pause) right where it shouldn’t be.’ Michael D. Danti and William B. Hafford report on the city of Sweyhat, a Mesopotamian mystery.

The idea of living in cities began in southern Mesopotamia, now known as modern southern Iraq, during the late 4th millennium BC. Large populations in this region could be sustained through irrigation agriculture, fed largely by the mighty Euphrates River, and from pasturing flocks of sheep and goat on the surrounding unsettled marginal land. Northern Mesopotamia, which today makes up northern Iraq and Syria, witnessed similar developments at roughly the same time. There, around ten inches of rainfall per year was adequate for productive farming of wheat and barley, and the surrounding steppe offered plentiful pastures for grazing animals.

However, not all parts of Mesopotamia are blessed with a ready source of irrigation or adequate rainfall for farming. Between these two zones is a vast stretch of land that suffers from low rainfall and has virtually un-irrigable, steeply sloping plains, nestled along the Euphrates. Over the past 6,000 years, most settlements in this forsaken area have been modest in size and hugged the banks of the river. One would hardly predict anything else.

Tell es-Sweyhat lies in this impoverished zone. It is at the centre of a crescent-shaped valley, 5km from the Euphrates, in what is today northern Syria. It was first chosen for excavation in the early 1970s because the construction of a hydroelectric dam and vast impound lake, Lake Assad, threatened to destroy it.

These early excavations revealed that Sweyhat is a fairly typical Bronze Age tell, consisting of a 14m high mound and an extensive low mound surrounded by a rampart with a long, fairly continuous occupational sequence spanning the 3rd millennium BC, the Early Bronze Age. Had the engineers working on the Tabqa Dam been correct in their calculations of the size of Lake Assad, the water would have swallowed the site and this would be all we know. Thankfully, the waters are still 4km away, and we have learned a great deal more about the Bronze Age as a result. But far from discovering a poor and impoverished settlement, as expected, we have discovered a site that, by the late 3rd millennium BC, had grown into a fortified and vibrant city. Why? How?

This is the ‘Sweyhat Enigma’, and 18 years’ of research is helping to explain.