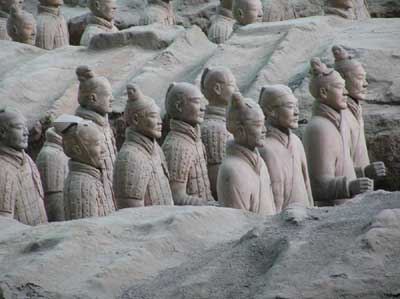 I had always wanted to go to China, writes CWA’s Nadia Durrani. Thus when I was invited to join a scientific conference in China, I leapt at the chance. The Chinese very kindly laid on a splendid tour of some of the principal sites for me, and I met a number of distinguished Chinese archaeological scientists. The experiences, of China old and new, were fascinating.

Xi’an is the capital of Shaanxi province. Its prominence builds on a lofty heritage: it boasts at least 3,100 years of history and has been the centre of 13 dynasties, including the Zhou, Qin, Han, and Tang. It also lay at the eastern end of the vital Silk Road.

The Terracotta Army site lies about an hour’s drive from the city, in the fields just to the east of Mount Lishan. It was found in 1974 when a group of local farmers was digging a water well and stumbled upon a number of the clay figures that belong to one of the greatest archaeological wonders of the world.

The nearby Mount Lishan was the manmade necropolis of the First Emperor of the Qin Dynasty: Qin Shi Huang (or Qin for short). Qin, who died in 210 BC was the Emperor who united China, and it was with him that the army was buried. Qin’s necropolis complex was made up of several offices, halls and other rooms, all surrounded by a gated wall. According to the ancient historian Sima Qian, Qin was buried alongside great amounts of treasure and objects of craftsmanship including a scale replica of the universe complete with gemmed ceilings to represent the cosmos, and flowing mercury to represent the great earthly bodies of water. Though his tomb is yet to be found, recent scientific work at the site has shown high levels of mercury in the soil of Mount Lishan. Could there be something in Sima Qian’s claims?

Whatever the case, the Terracotta Army is certainly an awe-inspiring sight and clear evidence of the Emperor’s might and wealth. To date, over 8000 life-size figures of warriors and horses have been excavated. Each is fashioned from terracotta, or “baked earth”, namely clay that has been kiln fired at relatively low temperatures. Each figure is unique in appearance and after firing, each was then coated with a lacquer finish to improve durability. Various pigments were then applied to breathe life into the figures. However, few retain traces of this colouring since exposure to air causes the finish to deteriorate. The figures include infantry, archers, and officers modelled in crouching or standing poses. Each was equipped with a real weapon including bronze spears, swords, and wooden crossbows with bronze fittings.

From the splendours of Xi’an, my next stop was a second brainchild of Emperor Qin Shi Huang: The Great Wall. Qin began the Wall during his reign in the 3rd century BC, though building continued until the beginning of the 17th century AD. Now a UNESCO World Heritage Site, it stands up to 9m high and extends over 6,350 km, roughly delineating the border between North China and Inner Mongolia.

Aside from demonstrating the strength of the Imperial rule, the wall was built to protect the people under the various Chinese dynasties from raids by Hunnic, Mongol, Turkic, and other nomadic tribes who were wont to blaze in from areas in modern-day Mongolia and Manchuria. It also became a means of communication along its length.

Qin’s original wall is largely represented by a long, low mound, located rather further north from the Great Wall that one sees today. His wall consisted of rammed earth with watch towers built at regular intervals. Nonetheless, construction of his wall used the labour of several million individuals – including forced conscription of criminals, prisoners of war, and political dissidents. Many people died while building the wall, with some estimating a death toll as high as one million workers.

The wall earned the title, “longest cemetery on Earth” and “the long graveyard” – though in reality, the corpses were buried away from the wall. Some have argued that an additional function of the wall was to occupy (and ultimately kill?) a huge group of otherwise unemployed citizens that were released into the population, for example from the army, after Emperor Qin’s major political act of uniting China.

The Forbidden City presents yet another massive, awe-inspiring, construction that is both beautiful yet oppressive. Covering some 720,000 square meters, with 800 buildings and over 8,000 rooms, it is the world’s largest palace complex. It is surrounded both by a moat 6m deep and a wall 10m high.

Building work began in 1406 and took 14 years, using an estimated 200,000 men. For over 200 years after its completion it was the seat of the Ming Dynasty – until 1644 when it was invaded by a peasant revolt. Thereafter, it was occupied by the following Qing Dynasty until 1860, when British forces managed to penetrate to the heart of the Forbidden City and temporarily occupied it. Come 1912, and the establishment of the Republic of China, the Forbidden City ceased being the political centre of China.

The City is divided into two parts defined as the Outer Court and the Inner Court. The Outer Court encompasses the southern and central sections and is based around three halls used for ceremonial purposes including coronations and imperial weddings. Perhaps most significant of these was the Hall of Supreme Harmony: the largest wooden structure within China built atop a marble base. The Outer Court also boasted the Imperial Library and archives.

The Inner Court includes the northern, eastern, and western parts of the Forbidden City. This was the ‘private’ zone in which the Emperor worked and lived with his family, eunuchs and maid-servants. It also has three main halls that were used for the daily affairs of state. The largest of these is the Palace of Heavenly Purity, which during the Qing dynasty often served as the Emperor’s audience hall, where he held council with his cabinet. At the centre of the hall is an impressively decorated dragon throne. Above it hangs a large board declaring “Justice and Honour”. Apparently, Qing emperors would hide their succession papers behind this board in order to avoid competition among their potential heirs. But for us, it was the skyscape that was most impressive: the roofs of the City are stunning, shining as they do with gold and red.

My final destination was Zhoukoudian – aka The Peking Man World Heritage Site. Lying some 50km southwest of Beijing, it is the most comprehensively and systematically studied site of Homo erectus and provides some of the world’s most precise scientific data for the study of the evolution, behaviour, and paleoenvironment of Homo erectus. The site is extensive, consisting of scores of caves.

I was privileged to tour the site with Guo Shi-lun, the very scientist who dated Peking Man’s earliest apparent occupation of the site to around half a million years ago. Homo erectus was the first of our ancestors to use fire, and Guo dated their occupation by using the fission-track dating method on ancient ‘hearths’ left by Peking Man.

It is unlikely that Peking Man invented firebuilding. Rather, he was probably able to get the kindling material from bush or prairie fires in the field. One way to keep the fire alive would have been by adding firewood or brushwood or to keep burnt charcoal under ash-earth cover in an idle state to preserve the fire, and when necessary it is essential to blow air underneath to expedite fire. It was sphene crystals buried in such ash layers that Guo dated (since the heat ‘resets’ the fission-track clock).

And so, right from the earliest times, China has boasted major developments and forward leaps. Throughout my time in China I was impressed by a culture that was monumental, technologically advanced, and ultimately, very much in control. ‘China will take over the world in 40 years’, said Yongchun Zheng, one of my young Chinese scientist guides. ‘I can well imagine it’, came my reply.