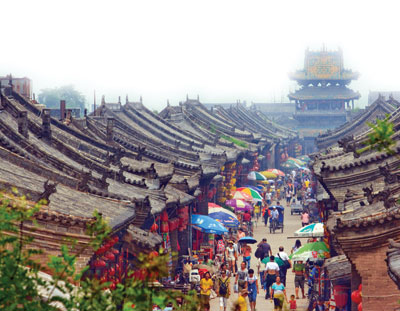 An ancient city frozen in time

Pingyao is an archaeological site with a difference: 30,000 people still live in it. Once the banking capital of China, it has been continuously occupied for more than 2,700 years, and today provides an astonishing picture of life in Imperial China. But, asks Tom St John Gray, are tourist dollars turning the city into a theme park of the past?

Pingyao, deep in the heart of China’s Shanxi province, is one of the best preserved archaeological sites in Asia. Its inhabitants still live in the centuries-old housing packed within the city’s imposing walls. The rare authenticity of this ancient living city has created a rapidly expanding tourist industry. But as millions flock here to experience life in the past, the inhabitants find themselves locked in a remarkable time capsule.

Modernisation of Pingyao is impossible without destroying an irreplaceable part of China’s archaeological record. As a result, Pingyao’s citizens endure archaic living conditions that are a constant struggle: lack of sanitation, ineffective heating during the bitter winter, cramped quarters, and inadequate infrastructure. Moreover, the revenue derived from tourism increases the pressure to put the needs of visitors ahead of those who live here.

Yet, the non-profit organisation Global Heritage Fund (GHF) believes the two are not mutually exclusive. Since 2007, it has been working with the people of Pingyao and the local government to preserve the fragile cultural heritage by establishing special historic areas within the city as well as revitalising traditional arts and customs.

Dr Vincent Michael, GHF’s Chief Conservation Officer, explains: ‘It is incredibly important that the town remains vibrant for the local population. Sites that are preserved only as tourist attractions are economic monocultures subject to changing tastes and fashions.’

Courtyard culture
Pingyao’s ancient courtyards are a tangible element of cultural and social history, and are intrinsic to the archaeological value of the site. Years of alterations and neglect have led to a loss of irreplaceable historic architecture. In 2008, GHF launched a partnership with the Pingyao County Government to conserve and revive these fading archaeological treasures while raising local awareness of the conservation principles and techniques involved.

The pilot restoration project at 12 Mijia Xiang, a rundown courtyard complex, was completed in 2009 and has been a resounding success. Kuanghan Li, Manager of GHF’s China Heritage Program, oversaw the scheme. He explains: ‘The project does not focus only on the traditional stylistic restoration, but combines traditional techniques with modern conservation principles to rehabilitate the historic structure to fit modern use.’

The restored building now serves the local community by functioning as a ‘living heritage workshop’, where a current arts and cultural scene can be encouraged and protected – proof that the cultural identity of Pingyao can be sustainable with or without tourist interest in the city.

With a budget of $1.5m, GHF has now selected a cluster of buildings on Fanjia Jie Historic Street that include courtyard residences dating from the late Qing Dynasty to the Early Republic period. Once home to the extended Fan clan, some of the structures will be restored for the families who still live there. Others have been earmarked for public use, such as heritage workshops to promote traditional crafts including papercutting and making cotton shoes and lacquerware.

Rich banking history
Pingyao was declared an outstanding example of a Han Chinese city of the Ming and Qing Dynasties (14th-20th centuries) by UNESCO in 1997, who awarded it World Heritage Status, noting that it ‘retained all its features to an exceptional degree and in doing so provides a remarkably complete picture of cultural, social, economic, and religious development during one of the most seminal periods of Chinese history’.

The city’s origins are much older. It was initially built as a fortress during the reign of King Xuan in the Western Zhou Dynasty (827-782 BC), but took the shape seen today in the Ming Dynasty (1368-1644). In AD 1370, during the reign of the Ming Dynasty’s Hongwu Emperor, the city walls of Pingyao were built, providing a layout of the settlement that has remained unchanged for more than 600 years.

Pingyao’s location on a trade route between Beijing and X’ian, both great ancient cities of China, guaranteed its status as a key transportation and commercial hub. During the Ming and Qing Dynasty (1644-1912), the powerful and wealthy Shanxi merchants would carry large amounts of silver along the trade routes, with heavily armed escorts serving as protection. This transportation of wealth proved to be precarious, expensive, and time-consuming, and with hundreds of merchant shops operating within the city, the need for better financial organisation in Pingyao became paramount.

In 1824, dye-shop manager Lei Lutai established the Draft Bank of Rishengchang (‘sunrise prosperity’). This was China’s first draft bank and marked an era-defining moment in the history of Chinese financial development. The newly formed banking business that handled money remittance and bills of exchange – or piaohao (‘notes dealers’) – catapulted Pingyao into an extraordinary period of prosperity. Piaohao mushroomed throughout the country, and many of these establishments were in Pingyao, at one point accounting for half of all the bank headquarters in China.

The ancient city has a unique position in China’s archaeological record, as Dr Kent Deng, London School of Economics and Political Science, explains: ‘Pingyao is the only remaining place where we find physical evidence of the Chinese native banking – others were all destroyed by wars, especially by the Japanese in World War II.’

For nearly a century, the city thrived as a prominent banking centre, with financial influence in China and across Asia, extending from Russia to Japan. This new-found wealth enjoyed by the citizens of Pingyao was reflected in the construction of magnificent buildings. High-quality structures by master craftsmen included courtyards and compounds, which now serve as a testament to the city’s Golden Age.