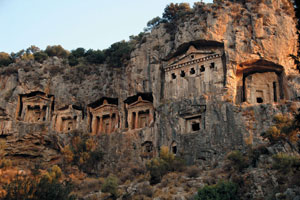 The city of Caunus (also known as Kbid), on the southwest coast of Turkey, first finds fame in the literary sources during the time of the Persian Wars (546 BC). There is a great deal to be found at this fascinating site including numerous monumental buildings and impressive rock-cut tombs.

Over the past 20 years, we have excavated areas including the agora and its basilica, the stoa building, the Basileus Kaunios, the nymphaeum, the monopteros, plus glorious temples to Apollo, Aphrodite Euploia, Kybele of Caunus (Artemis), Demeter, Isis and Serapis. In addition, monumental buildings such as the Roman baths, the theatre, and the domed church, have been cleaned and opened to public. These buildings are providing much information of great interest. For example, it seems that the Temple of Aphrodite Euploia was used as a sanctuary for sailors, while the theatre at Caunus preserves rare evidence for the periaktos device, a revolving triangular prism set on each side of the stage to indicate a change of scene. Another significant find has been the ‘measuring platform’, a unique monument with diagrams for designing the city’s streets to accord with the direction of the winds. Also of interest are the stele of Cybele-Matar, which were dedicated to Caunus’s chief god Basileus Kaunios, and include a money-box for offerings to the city and its ancient salt mines.

However, it was the site’s inscriptions that were the reason why Professor Dr Baki Öğün initiated excavations at the site some 20 years ago.  Öğün wanted to investigate the (then undeciphered) Carian language. He was sure it would help elucidate local politics prior to the 4th century BC (specifically with regard to questions about Carian and Lycian territory). His dream was fulfilled thanks to the extraordinarily important discovery of the bilingual stele at Caunus that allowed him to crack the Carian code. Another important discovery was a Greek inscription carved on the western wall of the harbour nymphaeum, the so-called Custom Law from Caunus, which provided evidence for the city’s efforts to recover from economic decline due to trouble operating the city’s harbour.

Since 1995, under my direction, excavations have focused on restoring and conserving the city’s major monuments, with a view to creating an Archaeological Park for Caunus and its environs. The team has cleared the main tourist arteries through the site and set up information sign-boards. The vaulted entrance on the north side of the theatre has been turned into an art gallery. Much effort was put into preserving and displaying how the site might have originally worked: a model of an ancient periaktos was set in front of the theatre in its original spot; a wooden doorway at the eastern vaulted entrance to the theatre was installed; a money-box for offerings to Caunus, was fashioned in the style of the period; a reconstruction of an olive-oil workshop was built; and doors to the palaestra (the place where wrestlers and other athletes trained), the villa and the nymphaeum were restored.

Following the cleaning and conservation of its mosaic, the South Chapel was opened for public viewing. In the August festivals of 2006, the ancient Theatre of Caunus was used to celebrate the 125th anniversary of the birth of Atatürk, the founder of the Republic of Turkey; and again in 2007 for the 800th anniversary of the poet Rumi.

Caunus has already contributed so much to our knowledge of the ancient world and we look forward to welcoming you to the site.