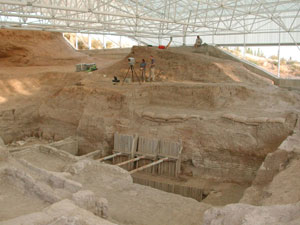 Catalhöyük was first excavated by James Mellaart in the 1960s and then again by Ian Hodder from the 1990s. The site has become famous partly for its large size (about 5,000-8,000 people lived there) and long occupation (the site is Neolithic and Chalcolithic and dates from 7400 BC to 5500 BC). It is also famous because of the crowding of its houses. There were no streets, instead people moved around the settlement on the roofs and entered the houses by ladders. But Çatalhöyük is best known because of its wonderful wall art and sculpture, which show narrative scenes such as humans hunting, teasing and baiting wild animals such as bulls, wild boar, deer and bear. There are also scenes that deal with death and burial and, indeed, in the numerous small houses people were buried beneath the floors. In one house, 62 people were buried beneath the floor. Sometimes the heads of the recently dead were removed, kept and passed down from generation to generation.

The figurines from the site concentrate on the animals that were involved in feasting and social display, and there are few clear human representations. However, at the end of the occupation of the site, in the latest Neolithic levels, there are figurines of women suggesting an increased symbolic role for women in the house.

Our recent excavations have focused on presenting the site to the public and there are now permanent shelters over two excavation areas so that visits can take place throughout the year. There is also a Visitor Centre, a reconstructed Neolithic house and a research centre. For more on this iconic site, see CWA 8.