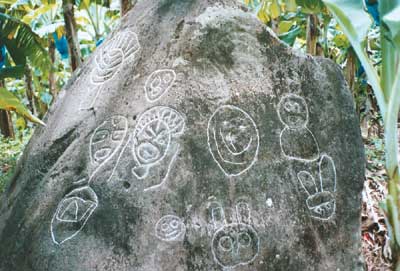 In the early 20th century, Thomas Huckerby, an intrepid archaeological surveyor and British missionary on the Caribbean islands of St. Vincent and Grenada, documented a number of prehistoric Amerindian rock carving sites on these islands. He also made artefact collections for the Heye Foundation in New York and described the two island’s rock carving sites in various anthropology journals.  However, over time, many of the petroglyphs have become lost and forgotten.  Now, almost 100 years later, anthropologist and explorer Michael Chaplan returned to St. Vincent and Grenada, 150 miles off the coast of Venezuela, to track down and investigate these elusive petroglyphs. Here Chaplan tells of his Caribbean quest in the now overgrown footsteps of Thomas Huckerby.

On ‘The Huckerby trail’

It was these words that inspired me to track down the lost St. Vincent petroglyphs.

My first expedition took me to the Yambou Pass where I was let off the local bus in what seemed the middle of nowhere. ‘That way man. Keep goin’ straight, straight, straight!’, the bus driver bawled while waving me down a dirt road, which cut through a fertile agricultural area where banana trees cover the landscape. I could smell them growing! The swollen, rainy season Yambou River rushed through the dense tropical vegetation 100 yards below me. Finding the rock carving sites described by Huckerby would be a major challenge. My only real clue was his statement that the petroglyphs: ‘stand in the middle of a pasture, which is dotted with large volcanic boulders’. However, since everything was so overgrown, I really needed to find someone familiar with them – assuming they had not become covered up and lost to current knowledge.

A half-mile hike brought me to a small thatch house with a banana farmer, Brendan, sitting under a flimsy bamboo awning. The day was brutally hot and humid, but I’m like a salamander in the tropics and was holding up well. I showed him Huckerby’s article, which included photos of the petroglyphs, and he immediately picked out one of the photos saying: ‘Yah man, Carib stone. Cross de river! You want a look?’ I readily accepted and we started down the steep banana tree covered slope. My barefoot guide was quick and sure footed, while I gingerly slid along on a carpet of rotting bananas, hoping not to slam into one of the teeming wasp nests hanging from the long banana tree fronds.

Reaching the turbulent Yambou River, Brendan found a crossing where we precariously balanced our way over 25 feet of slippery cobbles and drop-offs. It was a struggle not to get washed away as I held my camera high so it wouldn’t get drenched.

Then it was back to hiking until we reached a large boulder surrounded by banana trees. At first glance, I saw a very busy scene with nine eerie looking figures boldly carved into the rock.

All were anthropomorphic, including a figure with plaited hair that may represent a female, and two figures with rabbit ears. This boulder’s hubbub of figures has been interpreted as a supernatural wedding scene by Dr Earl Kirby, Director of the St. Vincent National Trust. My first reaction was to touch the figures and introduce myself. Then I outlined them with chalk. The deep grooves may once have been filled with colours made from plants and soil pigments. No doubt all this stone carving had taken a lot of work given the basic methods used. These can include percussion, pecking, grinding, incision, modelling, and sanding.

Petroglyph outline grooves can vary from some millimetres to some centimetres in depth and width. Perhaps there were special shamanic stone carving artisans who travelled among the islands to illustrate the magical side of life. This last conjecture leads to two questions that are always asked about Caribbean petroglyphs: 1) How old are they? and 2) What do they mean?

Regarding the first question, dating is problematic since no direct method has been developed. Methods typically used include associating petroglyphs with any nearby dated archaeological sites and assuming that the inhabitants made them. Stylistic element comparisons can also be made to similar groupings. This is somewhat risky, since it depends on a reliable dating of the index group.

However, as a baseline measure, expert investigators like Dr Irving Rouse of Yale University, the founding father of Caribbean archaeology, tend to assume that complex petroglyphs such as those interpreted as wedding scenes or ‘shamanic rituals’ are more advanced, and therefore the most recent. Those that are very simple, such as earless round faces with vertical noses, are considered the oldest.

Complicating the matter is that some petroglyph sites exhibit a mix of styles because people from different times shared the same rock carving surfaces. As for absolute dates, even though the region was settled well into antiquity, researchers such as Kirby and Rouse consider most Caribbean petroglyphs to have been made by pottery making peoples, particularly from archaeological horizons post AD 600. These more advanced agricultural societies utilised the environment to visualise and communicate with their ‘other world’ deities. Petroglyphs were carved where the magical spirits were thought to have lived, such as in caves, on remote mountain rock faces, and on boulders along rivers and coasts.

As for the meaning of Caribbean petroglyphs, there is no firm interpretation system in place here either. However, ritual explanations are often used to explain many petroglyphs.

Typically, many fantastical images exhibit caricaturesque exaggeration of features, the zoomorphising of human elements, and the anthropomorphising of animal elements. These exemplify drug-induced shamanic rock art known from other regions of the world.

Other possible petroglyph functions include use as boundary markers for food resources and as pilgrimage sites. It is not easy to think like a prehistoric Caribbean Amerindian. Apropos this, Garrick Mallory, a founding investigator of North American prehistoric rock art, stated in the Tenth Annual Report of the Bureau of American Ethnology, 1888’89: ‘American pictographs are not to be regarded as mere curiosities. In some locations they represent the only intellectual remains of the ancient inhabitants. Wherever found, they bear significantly upon the evolution of the human mind.’ Petroglyph analysis can include other factors such as the direction that it faces in addition to the physical features of the rock surface, which might be rough or have cracks, and somehow be part of the story being told. Carved rock surfaces should be studied for a few days in all degrees of sunlight, and even seasonally, in order not to miss anything. When viewing a petroglyphic group, it is best to let your eyes wander around the rock looking for how the figures may interact with each other, in what is known as a ‘prehistoric animation’.

Ancestor worship was also an important factor in prehistoric Caribbean religion. Dr Kirby has suggested that the weathered fresco of elongated figures, found on a remote rock face near the village of Petit Bordel on St. Vincent, represents spirit ancestors wrapped in their burial hammocks. He also believes that they were made by the pottery making Caribs who left northern South America, where similar figures are found, to invade the Lesser Antilles sometime around AD 1200. Huckerby speculated that these ‘very shallow’ incised figures were first outlined with sharp stones and then finished by rubbing with wet sand.

After arriving to explore the site at Petit Bordel, I found some handholds and made a stiff climb up to a heavily overgrown ledge. Having cleared away the thick overgrowth, it took me about 15 minutes to trace over the prehistoric artwork with chalk. As I worked, the figures stared solemnly at La Soufrière, the island’s cloud covered volcano that loomed in the distance.

Comparing the rock face before me with Huckerby’s photo, I noticed a small figure on the far left that he had overlooked – probably due to the dense vegetation – and one that he recorded had mostly weathered away, being barely visible. Then I stepped back to view these singular figures in their mesmerizing primal majesty. Old gods waiting for new believers! It would be interesting to know by what names the ancients called them.

After a while, I started to hear buzzing and then a few bees flew by. Then the air became thick with them as they landed and began entering two large fissures in the rock wall. I quickly saw the downside of being stuck out on that ledge and began climbing down, as the buzzing really got loud. I was very fortunate to have been there at just the right time to take some rare photographs.

In 1925, Sir Arthur Conan Doyle, author of Sherlock Holmes and a major proponent of exploration lamented: ‘The big blank spaces in the map are all being filled in and there’s no place for romance anywhere!’. In reply, I would say that Caribbean petroglyphs are still significant ‘blank spaces’ to explore, providing all the romantic adventures that the 1920s offered. I know that my petroglyph quests have led me to make a personal connection with these hallowed stone carvings and I plan to continue exploring on ‘the Huckerby trail.’ Believe me, once you enter the world of the petroglyph hunter, you will never settle for the ordinary again!