Rocky Cappadocia played a significant role in the history of Byzantium, yet little is known of this remote area. Eric Cooper explores the wealth of extraordinary archaeology found here to unravel the enigma of this little known corner of Turkey. 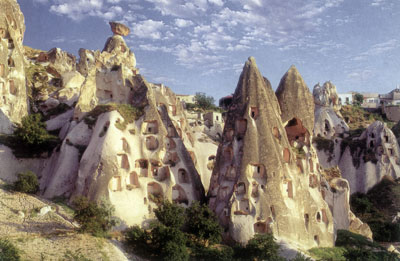 In 1712, the French envoy Sieur Paul Lucas introduced the West to Rocky Cappadocia, a wondrous moonscape land set within the 91,000km² (35,000 square miles) of the rest of Cappadocia in central Turkey. It lies within the triangle outlined by Aksaray on the west, the Caesarea-Tyana road on the east, and Niğde to the south.

Lucas regarded this surreal terrain of cave dwellings honeycombed in cliff-faces and habitat-pocked, gargantuan stalagmites as the vestiges of Byzantine monks who had exiled themselves to the highlands in order to practise their solitary pursuits. We should not be surprised, as Cappadocia was home to the great Church Fathers – Basil of Caesarea, Gregory of Nazianzos, and Gregory of Nyssa – whose collective influence was so significant that it persists even today. It was also home to a great many bishops, priests, saints, and monks, and a wealth of architectural remains, inscriptions, and artefacts reveal a Cappadocia dotted with thousands of churches and chapels, often traversed by pilgrims, and sometimes the place of miracles.

Later generations of scholars and explorers reaffirmed Lucas’ notion of Cappadocia. The desolate badlands, combined with austere rock-cut architecture and the tremendous number of incredible cave churches, along with a smattering of monasteries, captured the imagination, polarising opinion and relegating the region effectively to a barely populated wasteland – and then only by hermits, monks, and sundry ascetics. Adding to the fire are surviving churches that were donated by monks, like Kubelli Kilise.

Yet the founder of Kubelli Kilise was accompanied by three of his family. This suggests that he retired into monasticism, rather than being a life-long contemplative. This was also true for many more such churches, yet the traditional view of the region’s monastic aspect persists. Nor have written sources helped as much as one might suppose: in the 10th century, for example, Leo the Deacon insists that people in Cappadocia lived in caves, and the various Arabic terms for the region from as early as the mid-7th century only seem to corroborate the troglodytic nature of the place.

However, in the 1990s scholars such as Thomas Matthews, Robert Ousterhout, and others began to reconsider Cappadocia as the greatest collection of Byzantine archaeological remains. The developing picture is providing a sense of depth and vitality to the region that has been sorely wanting, helping to place Cappadocia in its proper historical context.

Despite the barren look of much of the region and low levels of rainfall, Cappadocia was rich in resources. A wide variety of crops was made possible by prolific use of highly effective water-management and irrigation systems. Seasonal river beds were lined with special holes that conducted water to aqueducts and was often distributed over several kilometres to various cisterns. In other places, simple micro-dams were created to trap water in small ponds along cascading routes. Many cone and cliff settlements carved water chutes that also fed into cisterns, and river traps were common. We also know of systems that condensed water vapour out of the air, while tapping distant aquifers through an ancient technology called the keriz – or qanat (see CWA 49) – conveyed enough water to supply major settlements and cities.

Such extensive irrigation allowed barley and other crops to be grown, and pocket-gardens and small orchards in even the driest of areas were productive, as we see at the small Byzantine settlements at Paşabaği, Uçhisar and Kızıl Çukur. Indeed, Byzantine hydraulic systems enabled cultivation of grapes for wine that slaked the thirst of all Cappadocians. Treading floors are found throughout the region, from underground cities to monasteries to elite estates. At Geyikli Monastery, it is still possible to see the crop chute that fed grapes through the roof to the treading floor below, from where the pressing flowed through a channel into pithoi along one side.

Agricultural produce was certainly important, but Cappadocia thrived on rearing animals. The highlands sustained a variety of creatures including cattle, sheep, goats, pigs, and even rabbits. These animals were essential as sources of milk and meat, as well as for hides and spinning. As Cappadocia is landlocked, light or self-moveable goods were vital for long-distance trade. Camels were also reared, both as beasts of burden and mounts. Equids, however, were the most highly prized beasts, both in terms of value and prestige.

The name Cappadocia is probably derived from the ancient Persian Katpaktukya, meaning ‘Land of Beautiful Horses’. It is here that the true essence of the region comes to the fore. The rolling plains and grasslands sustained generations of horses, donkeys, and mules. While the latter two were superb beasts of burden – and undoubtedly occasional mounts – the horse reigned supreme. Cappadocian steeds were always prized. The Persian emperors Assurbanipal, Darius, and Xerxes treasured them; the 3rd-century AD Syrian author pseudo-Oppian noted their military value. So, too, did the great Cappadocian cavalry generals like Maurice, Nikephoros Ouranos, and Nikephoros Phokas – the first and last of whom were also emperors. Almost certainly, some of these horses came from stables found at small settlements and on elite estates.

The importance of the horse cannot be overstated: they were used for the post as well as hunting, and became the primary mode of Byzantine land warfare as well as of more peaceful transport. The horse figures prominently in the epic Digenis Akritis, whose eponymous hero is a Cappadocian lord.

The considerable wealth of Cappadocia was highly prized. Large swathes of the region had been claimed for the Imperial privy purse early on. The Domus Divina (Divine House) provided for the emperor: by Justinian’s time (527-565) it supplied the empress Theodora with 23kg (50lbs) of gold annually. It is more telling that the infamously fractious Cappadocian elites not only sought to take these Imperial assets, but had been doing so with some success for a long time.

Various legislation by the emperors of Late Antiquity decries roving bands of horsemen, cattle rustlers, and those stealing Imperial property from the Domus Divina. There is little doubt that herding lands, horse lands especially, were incessantly encroached on, while livestock and particularly equids were stolen. Those unable to protect their own property, regardless of status, were always at risk.