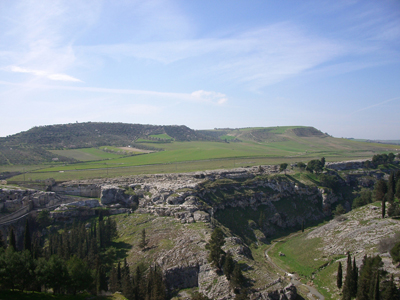 Today, Gravina is one of those little-known Italian towns that every tourist falls for. Meaning ‘ravine’ in Italian, the town is aptly named, as it teeters alarmingly on the brink of a precipice. This picturesque, if precarious, position lies some distance inland – 40 miles west of the provincial capital of Bari on the east coast, and 50 miles upriver from the spot on the Tarentine coast where a group of Greek colonists elected to found the city of Metapontion (Roman Metapontum) in the 7th century BC.
Gravina itself is a comparative whippersnapper, starting life as a cave-dweller’s centre in the 9th century AD. It reached its peak between the 14th-18th centuries when it was the seat of one of the branches of the powerful Orsini family. But while the story of Gravina is one of Medieval princelings, a site of far greater antiquity lies on the far side of its ravine.

The open ground beyond the ravine is dominated by a hill known as Botromagno. This striking local landmark is the site of what would probably, in Britain, be called a hillfort. In 1965, Alastair Small, newly arrived in Italy as a student at the British School in Rome, was despatched here to undertake a survey and rescue what he could from the depredations of the tomb robbers. This assignment proved to be a long-term commitment, and Alastair worked at Botromagno for a number of years, sometimes by himself, but more often as an assistant to more senior excavators. In the 1980s, the site was selected as the venue for a sustained campaign by Ruth Whitehouse, which has produced a weighty publication. Botromagno thus became the type site of Iron Age hillforts in southern Italy. Remaining in occupation for most of the 1st millennium BC, it provides a key benchmark against which we can assess the impact of Greeks, then Romans, then Carthaginians on the indigenous peoples of the interior.

Head for the hills

Archaeologically, the story begins around 1000 BC, at the dawn of the Iron Age. In a development mirrored at many other hilltops in the area, a scattered collection of huts grew up on a ridge below the hilltop. A growing desire for high-ground sites is apparent in southern Italy’s Bronze Age, but it is only really in the Early Iron Age that the practice takes off. Yet, other than their lofty location, there is little to distinguish the occupants of Botromagno from their valley-dwelling forbears. They still lived in wooden huts, and they still practised subsistence agriculture. Bones show that cattle, pigs, sheep, and goats were a key part of this, while a wide range of cereal crops and vegetables were also cultivated. Although the various excavation campaigns on the site have proved that there was widespread early occupation, we still do not know how dense it was. Rather than an integrated settlement, it may have been little more than a loose affiliation of families.

Whatever the precise nature of life at Botromagno, the culture of its indigenous population was strong enough to survive the initial arrival of Greek colonists without any obvious change whatsoever. Although the major colony at Tarentum was founded in the 8th century, with Metapontum following soon after, it is not until around 500 BC that the influx of foreigner settlers on the coast makes itself felt in the archaeology of Botromagno. Even this belated embrace of the Hellenistic world appears to be selective, with most of the Greek influences representing either technological advances or a means of displaying power. Local pottery, for instance, begins to mimic Greek designs, and benefits from the arrival of the fast potter’s wheel. Houses at Botromagno are built of stone and tile for the first time. A warrior was proudly buried alongside his Greek armour and weaponry. All of this points to increased links between locals and newcomers. But while the locals were seemingly seduced by some of the trappings of Greek life, they may have been less taken with the settlers themselves.