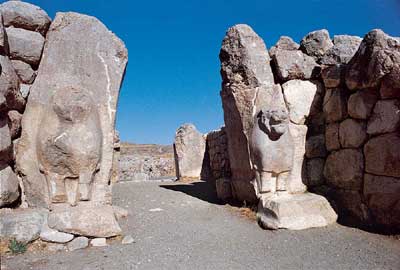 The Hittites are one of the least known of the Great Empires of the Ancient World. But from their centre in Turkey they dominated their corner of the Mediterranean from the 16th to the 12th century BC. They competed and fought against the Egyptians and were indeed one of the few peoples that the Egyptians dealt with on equal terms. Their capital was at a site that they call Hattusa at the modern village of Bogazköy. And here the German Archaeological Institute has been excavating since 1931. What have they been discovering?

In the ancient world, real power was often displayed in the form of storage capacity. These societies were tribute societies, where each level of the society paid tribute to the level above in a system that is often called gift exchange. Thus at the top level power was signified most clearly by the display of the assets garnered by this tribute system. Thus in Minoan Crete the palaces are surrounded by extensive magazines containing olive oil, while in Egypt, hidden away behind the temples are huge storage areas. Now at Bogazköy, ostentatious storage capacity has been discovered in the form of granaries longer than a football pitch which must, when full, have contained an impressive amount of grain. It had no doubt a practical purpose of redistribution in times of famine, but more important no doubt was the ceremonial purpose of display and therefore power.

But it was not just grain that was stored: in addition to the granaries another form of storage has been discovered in the form of water reservoirs and these too, though less obviously ostentatious must have displayed something of the power and forethought of the rulers.

The small village of Bogazköy lies 100 miles east of Ankara. Here, in the 1830s, extensive ancient ruins were discovered. At first they were thought to be Classical but eventually they were identified as the remains of Hattusa, the capital city of the Hittites from ca. 1650-1200 BC. Here, since 1931, the German Archaeological Institute has been excavating, and large areas of the city have been laid open for the visitor. Excavations however still continue, and recently two surprising aspects of the economy of the town have been revealed.

Two sets of huge granaries have been discovered where grain was stored in massive rectangular silos, using principles very familiar to British archaeologists studying the grain storage pits of the Iron Age. These, however, were rather larger. The first was discovered in the excavations in the north-east part of the city in Büyükkaya, the Great Rock (37 on the plan) where since 1994 a long-lived settlement has been excavated. This is the natural citadel, and was occupied from the Copper Age through to the Iron Age. In the 14-13th century BC, however, it was used as a giant granary where supplies for the city and country were stored in rectangular cellars dug into the earth. Eleven of these have been so far discovered (there were doubtless more), the largest of which measures 12m x 18m and was certainly more than 2m deep, with paved floors. The bins so far discovered would indicate a capacity for at least 1,800-2,400 tonnes of grain, if all of them were in use at the same time.

Several years later, an even larger silo (8a on plan) was discovered behind a stretch of city wall. However, instead of being a pit dug into the earth, this was a built structure, with mud-brick walls 1.5m thick. On the outside, the whole complex was packed with layers of loam and clay in order to ensure it was air – and watertight. It was huge, measuring 118m long by up to 40m wide – longer than a football field even if not quite as wide. It had 32 rectangular chambers in all, in a double row. It was in fact earlier, dating to the 16th century BC, in the Old Hittite period, when the postern wall was built.

But what made them really interesting is that 12 of the chambers had been consumed by fire when full. This meant that the charred grain was perfectly preserved. Excavating them was like excavating in a coal-mine. The mud-brick walls are burnt red, as the walls had been interlaced with timber beams. In the chambers, large amounts of charred grain are preserved – the soundings were cut through layers of pure grain up to 1.2m thick. Several hundred tons of charred grain still lie buried here, probably the largest find of its kind in the Ancient Near East. According to the botanical analysis most of the grain is barley, though at least one of the chambers was filled with einkorn wheat. The botanist, seeing the amounts involved, did not know whether he was in heaven or hell.

The grain was not burned to ash because of the lack of oxygen, which is due to the storage principles. Once stored under the air-tight covering, the grain will last for years, if not decades, and the same principle worked with fire; though the timber in the walls burnt, the grain merely charred. The process must have taken several days, which would have given the rescuers the possibility of preventing the fire spreading to the whole complex.

Another major economic resource has recently been excavated in the form of five huge reservoirs. These lay in the southern part of the city, just inside the southern walls, number 16 on the plan, where they were originally recognised by aerial photography. There were five in all, two long narrow rectangular ones, with circular ends, number 3 and 4, two shorter rectangular ones, number 1 and 5, separated by a narrow path, and a circular one, number 2. They were dug in marl, which was itself completely water-tight, so there was no further need for the insulation of the embankments. But though they were narrow, they were very deep – up to 8m – in order to minimise the loss due to evaporation.

It appears that the ponds did not remain in use for long, for they rapidly filled up with silt, brought in with the water. In one of the ponds, number 1, there was a dump of more than a ton of pottery. This pottery was all of unusual types: long thin spindle shaped bottles, which must have been libation vessels. But there were also numerous high-quality jugs and pots, as well as other containers – of which some 15-20% were burnt. It would appear that these are the remains of broken cult containers, perhaps even the inventory of one of the numerous burnt-down temples. However, the pots all date to the late 15th century, and therefore provide a terminus anti quem for the ponds, which must therefore belong to the early Hittite stage. They are similar to, though more than a century later than, the earliest of the grain silos; and provide evidence that massive central storage capacity was a source of power in the early Hittite Empire.

For the last two years, the team has also been undertaking some experimental archaeology in order to reconstruct a 65m long stretch of the wall of the lower town, which comprises three lengths of curtain wall and two towers. This enterprise is not confined to re-establishing the original appearance of the wall but also sets out to do a time and motion study of the manufacture of the original materials, the building of the wall, and then to observe the maintenance problems involved. In this way, it will be easier to understand not only the building design and execution, but also the problems of maintenance in the Hittite period.

The wall was built of mud-bricks on a stone base so the first task was to reconstruct the stone base. The Hittites had not mastered the problems of splitting stone, and so all the stones were prepared by pounding with stone hammers, and thus, the external surface does not have the regular appearance of ashlar masonry. The next task was to set up a factory to produce mud-bricks. The Hittites’ mud-bricks were large – approximately 45 x 45cm, but thin at c.11cm, weighing 34kg. After an initial experimentation phase, a production rhythm was established, and approximately 13,000 bricks were produced in the first year and another 27,000 bricks in the second year, consuming 67 tonnes of straw (a total of 65,000 bricks will be needed). They dried out in approximately a week and a half in the warm sunny weather, and the strength and durability of the tiles was tested by standing a modern tractor on them.

The towers were then reconstructed on the basis of models found as decoration on pottery vessels. Most of the wall has now been completed and the exterior has been rendered in a smooth surface by covering it with a layer of mud plaster. Already it is becoming a major feature of the layout of the city, and when it is completed it will enable the visitor to get a much better idea of how impressive Hattusa must have been in its heyday.