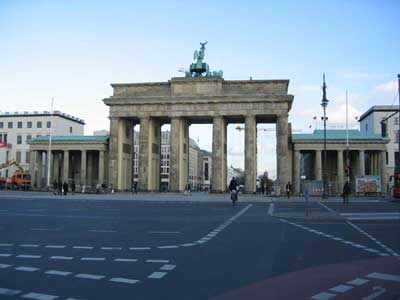 In a drawer at home, I have a small fragment of 20th century history: a mundane piece of concrete, daubed with several layers of paint. This was once part of The Berlin Wall. As the Cold War’s most iconic structure fell in 1989 a million fragments were bagged in sealed plastic, like archaeological small-finds, and sold by local entrepreneurs.

The past is a very messy place, especially the recent past. Dig and we resurrect both pride and shame. Nowhere is this tension of modern life more apparent than in Berlin. In 1990 German re-unification rapidly followed the demolition of the wall. Berlin’s underwent the shock of yet another historic transformation – Die Wende, the change, they called it. Unemployment soared; companies moved out of West Berlin which lost it’s Cold War status as an island of democratic freedom.

Heritage is often portrayed as cosy and complacent, as sanitised, sepia-tinged nostalgia.

For Germans the politics of memory is a fiercer beast. In the period of fragile post-war democracy West Germans, naturally, maintained a tactful silence about the horrors of their National Socialist past. But this amnesia was increasingly challenged in the 1980s as places of memory began to be created and groups developed the concept of memory-work (erinnerungsarbeit) – literally working through historical documents, photographs, film and art projects to confront the ghosts of the past in the present, to create haunting reminders in everyday settings.

Into the 1990s, Berliners contested among themselves how best to cope with the aching wounds which still racked their society. What role, they asked, should the urban fabric play in the memories, dreams and nightmares? Karen Till in her book New Berlin: Memory, Politics, Place (University of Minnesota Press, 2005) quoted a member of staff of the German Historical Museum, speaking in 1991: it was simply too painful to remember the significance of Berlin and it’s historic buildings following the war.’historic’ buildings were removed to forget about the past now the reverse is true, people are sad that so many buildings were destroyed and blown up during and after the war, and so historic preservation exits in an exaggerated form in Berlin. During my trip to Berlin this Autumn, I found that this sentiment is not immediately obvious in Potsdamer Platz where the Sony Tower and a shopping mall have eradicated the ‘death strip’ the no-mans land between the two Berlin Walls which separated East and West.

I find today’s Berlin weirdly schizophrenic.The Potsdamer Platz development has scoured away urban history with the efficiency of a modernist glacier. Yet immediately to the West, and significantly in the former west still lies the Kulturforum, designed by Hans Scharoun in 1956 and containing his distinctive gold-tile clad concert wall. This open park-like area of cultural palaces symbolised the freedom of democratic Berlin. But as Scharoun was influenced by the ideas of Martin Heidegger, arguably the 20th century’s greatest philosopher and, inconveniently, a Nazi sympathiser, the east German authorities regarded the Kulturforum in a sinister light.

Then, east of Potsdamer Platz, the new Berlin has chosen to evoke the spectre of its Nazi past, not by memorialising real places stained by history, such as the nearby Hitler’s Bunker, but by creating new places of memory; in what is in effect a Memory Quarter. Closest to the Potsdamer towers is the Holocaust Memorial which opened, after long years of debate and delay, on May 12 2005.

Designed by the American architect Peter Eiserman – and conveniently close to the American Embassy – the memorial consists of an enormous undulating field of 2700 grey concrete steles covering 5.5 acres, at a cost of 35.1 million Euros. Peter Eiserman wants the visitor to feel the disconcerting impact of the shifting ground, and changing heights of the concrete blocks. The obvious reference is to a cemetery of undulating gravestones, though it reminded me of the vast warehouses that the camera pans over at the conclusion of Citizen Kane, and referenced at the end of Raiders of the Lost Ark as the depositary for the Ark of the Covenant.

And that is the problem with memorials, as opposed to real places; people will develop their own associations. At its opening ceremony Paul Spiegal, Head of Germany’s Central Council of Jews criticised the monument as too abstract and failing to confront the issue of German guilt. Then one of the monuments promoters- in-chief, Lea Rosh, caused further controversy by announcing that she wished to embed a human tooth, supposedly of a Jewish victim which she had found at the Belzec concentration camp, into one of the steles. Paul Spiegal, who seemed to know more about Jewish burial practice than Ms Roth, was not impressed. He said that this was a memorial not a cemetery. Yet the site’s monitors seem to treat it as such. When I visited recently they were doing their best, rather officiously, to stop children treating it as an adventure playground.

Arguments have also centred around the priorities of memorialisation. Should 35 million Euros have been spent on creating a new place of memory when relatively little has been done to conserve real places of suffering, notably Sachsenhausen the concentration camp on Berlin’s suburban doorstep? Ultimately and surprisingly less controversial is the new Jewish Museum, south-east of Potsdamer Platz in the B Kreusberg district that opened in 2001. I was fortunate to visit its architect, Daniel Libeskind, in the 90s when he took me around his radical and complex museum several times. He explained that his building emphasises loss but also continuity.

Thus within the building’s structure a great void slashes through a fragmented Star of David. Meanwhile, the exhibition within celebrates the achievements and richness of Jewish life and culture through the ages.

In this respect it is not a ‘Holocaust Museum’ such as that designed by James Info Freed in Washington, America. Freed’s Holocaust Museum building, through its cold steel and concrete, deliberately evokes the aesthetic of a concentration camp and the cattle trucks that transported the victims. Aged twelve, I visited the remains of the concentration camp at Dachau. Freed’s building and its powerful exhibitions recreated the visceral experience for me, especially as I accompanied a camp survivor. I doubt the chatty flocks of schoolchildren felt the same. The past is not neutral. Critics of the holocaust industry inevitably see neocon pro-Israeli motivation in this particular selection of history. The Washington Holocaust Memorial Museum’s current highlighting of the tragedy of Darfour is an attempt to escape such straightjacketing.

A hundred years ago the Futurist Filippo Tommaso Marinetti announced that museums were redundant, nothing but public dormitories, superfluous in a world dominated by the beauty of speed. He thought they, along with archaeology, should be consigned to the dustbin of history. How singular in his thinking he has been proven. In the 21st century the museums that tell the stories of our past are thriving and growing.

And Berlin? It is back in the front line.