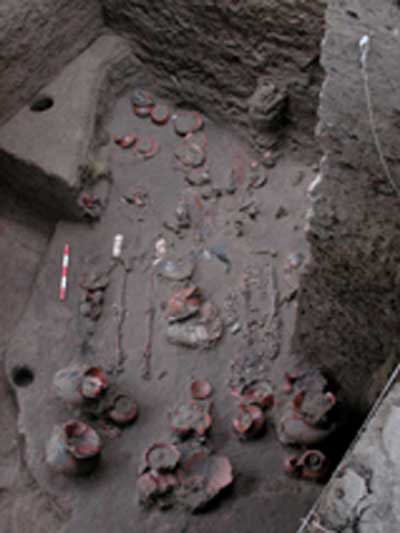 Some of the richest burials ever discovered in South-East Asia are being uncovered at Ban Non Wat. The site, which lies 35 kms west of the town of Phimae, is a huge mound , and the burials are being found at the bottom of a 10 metres deep trench, as shown in photo right.

Many of the burials are extremely rich with a panoply of pots, both at the head and at the feet (see below). There were also bangles of white shell on both arms and numerous small beads were discovered, evidence that originally people were buried in richly embroidered dress.

Charles Higham of the University of Otago in New Zealand, working with Earthwatch volunteers, has also been uncovering a number of super burials where the bones are frequently disturbed, suggesting that the burials had been made after most of the flesh had rotted away and the bones were buried in heaps, reflecting some gruesome ritual.