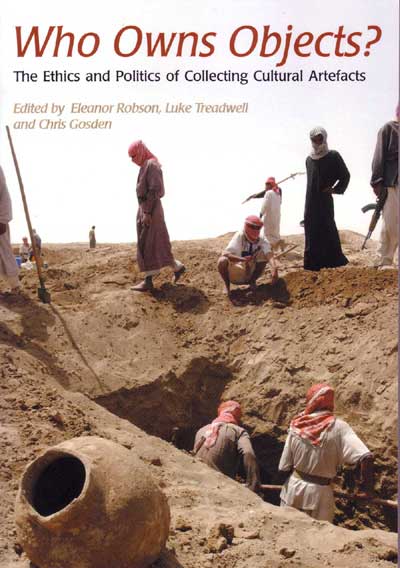 This consists of nine essays that had their origin in a series of lectures given at Oxford in 2004 with the aim of bringing together dealers and collectors on the one side with museum curators and academics on the other.

The opening piece by Neil Brodie, the high priest of the Cambridge school, is followed by articles by George Ortiz a collector, James Ede the champion of the antiquities trade, and the most interesting article from Sir John Boardman. Sir John, the former Professor of Classical Archaeology at Oxford is most unhappy with modern trends, and is emerging as one of the foremost spokesmen against restitution.

There is considerable discussion about some of the recent rather illiberal British moves, ranging from the signing of the UNESCO Convention, to the draconian Dealing in Cultural Properties Act of 2003, and the DCMS (government) document on Combating Illicit Trade, with papers ranging from total acceptance (David Gaimster) to a distinct unease.

The most fascinating article is the final one by Mark O’Neil, the head of Glasgow Museums, over the repatriation of a ‘ghost dance’ shirt to America. The shirt came from the massacre at Wounded Knee in 1890 when the American cavalry massacred native Americans who had been spurred on by a new religion – the Ghost Dance. Some of the survivors joined Buffalo Bill’s Wild West show which travelled to Glasgow where they sold or gave some of their relics to the Kelvingrove Museum. These were recently and controversially ‘repatriated’ to America, and the arguments are presented, though the author was himself the proponent of the repatriation.

What he does not do is to look at the question of what has happened to the objects now they have been ‘repatriated’; are they properly displayed in a proper museum? Are they seen by lots of people? Or are they simply lost among the collection of other similar shirts? Perhaps O’Neil should go to America to find out.

All would have benefited from reading Tokeley’s book and absorbing at least some of his arguments. What a pity too, that the organisers did not think of looking at the Antiquities laws of the country in which they live. Again, a glance at the Portable Antiquities Scheme would have been illuminating, – though sadly those who run the Portable Antiquities Scheme never seem to realise the basis of the law, that objects, unless they are Treasure trove, belong to the landowner. The scheme works in England and it is a great pity that we do not recognise its value and begin to preach to other countries about it. (And, sotto voce, it is a pity that they ignore my own book Who Owns the Past?, which was published by the Adam Smith Institute in 1997.)