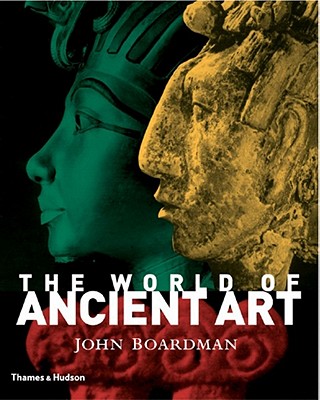 Is it possible these days to write a book on ‘ancient art’? Well, if there is one person that could do it, it is our foremost classical scholar Sir John Boardman, the guru of Greek vases who at a single glance can date any Greek vase to within 20 years. He retired in 1994 from being the Lincoln Professor of Classical Archaeology and Art at Oxford, and since his retirement he has been spreading his net more widely to the art of the rest of the world. In The World of Ancient Art he places ancient art into three or rather four categories.

He puts forward the proposition that world art can be divided into three separate environments (he begins with Ice Age art, but this is rather different).

The main and most successful environment is that of the great temperate zones, where the benign climate and long river valleys led to the development of the major urban societies running from China through the Near East and Egypt to Persia, Greece and Rome, and then to the New Worlds: these inevitably form the major part of the book. Then there are the Northern Steppes, home to the pastoralists and nomads who produced small scale art which could be carried around on horseback. He begins with the art of the steppes, but expands to include the Scythians and the Celts. Finally there are the tropical zones in South America, Africa and Oceania, where unfortunately little ancient art has survived earlier than that of the 19th century.

This is a fascinating thesis: but do I believe it? I suppose that the comment of the academic theoretical archaeologist would be to say that the underlying philosophy is ‘processual’, that is the philosophy of the 1970s and 80s based on the study of environmental processes. Today we have moved on to ‘post-processual’ archaeology, paying more attention to ritual, though postprocessual archaeology, like its cousin post-modernism, tends to degenerate into vapid cynicism.

The answer, I think, is that it doesn’t really matter if one accepts the framework or not: it is the journey and not the arrival that is important.

Sir John may be unhappy with this but the real strength of the volume is that it is a magnificent picture book.
In too many books on art, the author rabbits on assuming that the reader has an intimate knowledge of the objects he is talking about – which is rarely the case. This book is different.

The argument is carried in short introductions and the bulk of the book consists of over 700 illustrations (90 in colour) with long descriptive captions and it is these ultimately that carry the main argument (only Thames & Hudson could have published such a book – congratulations to their picture researchers). Whether one accepts the main thesis is basically irrelevant: this forms a splendid introduction to the arts of the world in the company of a master-guide who is supremely knowledgeable, and occasionally a little provocative. A.S.