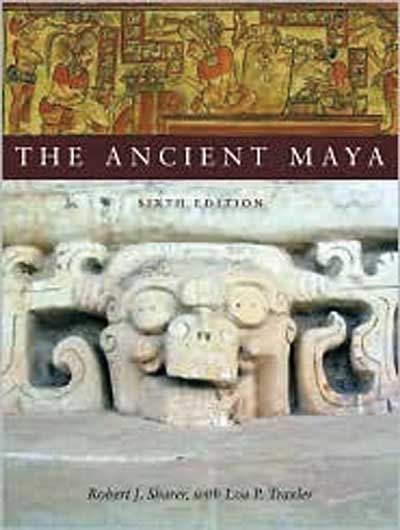 The Maya civilization of Mesoamerica encompassed the entirety of what are now the countries of Guatemala and Belize and large parts of adjoining Mexico, Honduras and El Salvador. The romantic vision of mysterious jungle-shrouded ruins and glyphic texts that withstand decipherment is dispelled by the most recent sixth edition of The Ancient Maya. The book is authored by Robert J. Sharer, Shoemaker Professor of Anthropology at University of Pennsylvania and Loa P. Traxler, Research Scientist in the American Section of the University Museum of Archaeology and Anthropology. Both have conducted extensive, long-term and multidisciplinary excavations at important archaeological sites in El Salvador, Guatemala and Honduras.

The Ancient Maya is a comprehensive synthesis of the current state of knowledge of Maya studies. In fact, I know several scholars who habitually turn to The Ancient Maya to glean the current consensus in Maya studies, before turning to write a publication or report. The book provides clear overviews of the ancient Maya’s natural environment, economy, social structure, religion and intellectual achievements, but the bulk is dedicated to in-depth reviews of the nearly four millennia of Maya prehistory and history, through each of its consecutive phases spanning from the pre-Classic origins of Maya civilization to the Spanish conquest in the 17th century.

The successive authors of the six editions are prominent Maya scholars who have greatly influenced the field, starting with the first edition of 1946 written by Sylvanus Morley, followed by the third edition of 1956 revised by George Brainerd, and culminating in the last three editions that have been revised and considerably expanded by Robert Sharer since 1983. As such, the whole series of editions is more of an institution in its own right, providing snapshots of the discipline as it develops.

The evolution of Maya studies is nowhere clearer than in the field of epigraphy, the study of ancient Maya hieroglyphic inscriptions, where great strides have been made in the past few decades. While in the first edition the topic was relegated to the back of the book, since the script remained mostly undeciphered at the time, in the sixth edition the epigraphic chapter has duly been moved towards the front of the volume, and it is abundantly illustrated with excellent figures penned by Simon Martin, who serves as a Research Specialist in Maya Epigraphy at Penn Museum.

With this book, the aficionado, student, and professional will find him or herself well-equipped for forays into the Maya past, both at home and while visiting archaeological sites in the Maya area.

Review by Christophe Helmke, an archaeologist and epigrapher specialising in the ancient Maya.