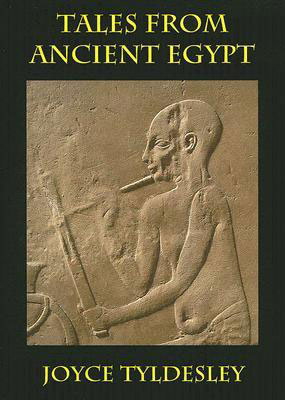 Tales from Ancient Egypt
Joyce Tyldesley, Rutherford Press, £8.50
In the beginning nothing existed but the terrible, swirling waters of chaos. There was no land and there was no sky. No gods, no people, no light, no warmth, no time and no death. Only the dangerous, endless waters. But deep within that dark sea there floated a perfect egg. And trapped within that egg was a solitary spark of life which struggled constantly to escape.
No, this is not the latest theory on the earth’s primordial soup, rather, so starts the creation story of the ancient Egyptians, as told in Tyldesley’s entertaining little book.
Tyldesley, an Honorary Research Fellow at the School of Archaeology, Classics and Oriental Studies at Liverpool University, has chosen to retell, rather than provide straight translations, a selection of stories that survive from Ancient Egypt. Thus Tyldesley provides a flowing collection of enjoyable stories, rather than a bogged-down academic text; although she does a sterling job of providing a pithy commentary to each story so setting it in its chronological and cultural context.
in Ancient Egypt, it is estimated that between 1% to 10% of the population were literate. This means that the stories of the lower classes may well have disappeared, simply because no-one wrote them down. Despite this inherent bias in favour of the élite, many of the Ancient Egyptian stories, so ably retold by Tyldesley, have an eternal relevance and immediate appeal. This is particularly true of those that deal head-on with philosophical questions that perplex us still: from where did we come, and to where do we go after death? And while it would be enjoyable to gain a closer feel for the everyman – or woman – in Egyptian society, Tyldesley’s tales nonetheless provide tangible insights to the ancients’ lives, beliefs, hopes, and fears.
This wonderfully entertaining and evocative book is published by Rutherford Press Ltd, a new company established by Egyptologists, whose aim is to produce readable, yet accurate books on ancient Egypt. Part of the profits from this, its first book, will be donated to support excavations in Egypt, an initiative they intend to continue; we wish them every future success.