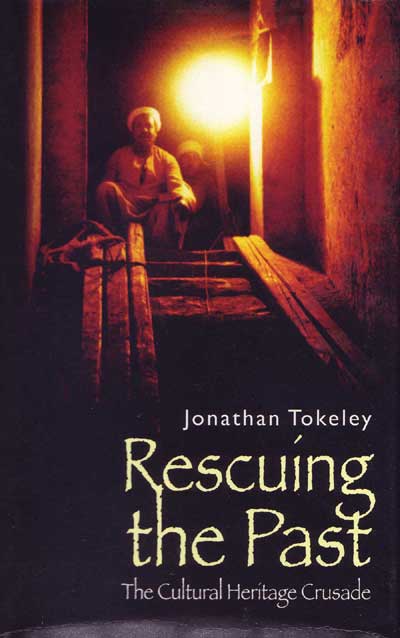 Is the tide turning in the ‘cultural heritage crusade’? For a generation or more, it has been the conventional wisdom that objects should be returned to the land where they were discovered. Now the consensus is being challenged.

Recently Dorothy King in her book on the Elgin Marbles (noted in CWA 16) put the case why they should remain in the British Museum, and I now have three further books that deal in various ways with the question of who owns objects. Of these by far the most interesting – because by far the most controversial and the most coherent – is Rescuing the Past: the Cultural Heritage Crusade by Jonathan Tokeley (Imprint Academic, Exeter, £25).

Jonathan Tokeley is an interesting character. Having read Biology and Philosophy at Cambridge, he worked for his PhD on philosophical ethics at University College London, and then trained himself as a restorer of antiquities. However, in 1996 he was convicted of smuggling antiquities out of Egypt and was sent to prison for six years – he claims unfairly, as the goal posts had been moved. This new book is not so much a justification of his past, though this to some extent comes into it, but rather an all-out philosophical attack on what he calls the Cultural Heritage Crusade. His bêtes noires are liberals, UNESCO, Cambridge, and, in particular, Colin Renfrew: he describes his own philosophical point of view as being ‘libertarian’.

His heaviest attack is on what he calls the ‘country-of-origin’ argument. The conventional wisdom today is that objects belong in the country where they were excavated. What is the basis for this? Is it that there has been cultural continuity between the society that made the objects, and the present inhabitants? Most claims for restitution would fall on this basis. Is it based on genetic continuity, or, failing that, on continued occupancy by the same people? How about deposits made by peoples who have long ceased to exist, as for instance the Etruscans? He instances the case of two ostrich eggs, originally gathered on the African coast, carved by the Phoenicians, possibly in Lebanon or Jordan or Egypt, then imported to Etruria where they were found in a tomb in Civitavecchia and brought to London in the late 70s. In what way can these be considered to be ‘Italian’? His solution, as far as I can make out, is that we should be mainly concerned about the present welfare of the antiquity: most objects would be far better curated in say America, than they would be in the damp cellars of some remote museum in some third world country. He looks too at the problem of Islam, where the 7th century Arab invasions destroyed all cultural links with antiquity, so modern Muslims cannot claim discovered relics as cultural heritage. He might have extended this to Christianity and to the edicts of Theodosius in 409-10, a comprehensive rejection by the authorities of their pagan past, which resulted in an orgy of destruction by the Christians of classical monuments. Any continuity between the pagan culture of the Parthenon, and the modern Christian inhabitants of Greece, was surely broken by Theodosius at this point.

The book is very much what an old fashioned schoolmaster would call an ‘alpha/gamma’ book, that is, parts are outstanding, parts less convincing. Many of the arguments are a straight down-the-line restatement of the classic Anglo-American philosophical and economic arguments that underpin the success of the Anglo-American economic model today: a belief in private property, and the importance of the market, beliefs that are not very fashionable in our universities today. He argues that objects were only made valuable because collectors and dealers gave them value. In places the book is somewhat over the top. The latter two-thirds is based on Egypt, the country that he knows best; it is perhaps a pity that he does not look at the current law in England and the Portable Antiquities system that seems to work so well, and which would fit in very well with many of his arguments. He goes out of his way to pick fights with many of his opponents – which is often very amusing and makes for a controversial, if lively, text.

Nevertheless this is a major and very important book and should be on the reading list of anyone teaching a course on archaeological ethics. It is, after all, one of the principles of ethics that one should always consider the opposite point of view, even if one may consider the source to be somewhat tainted. If anyone omits this book from a reading list on archaeological ethics, that would surely itself be unethical.