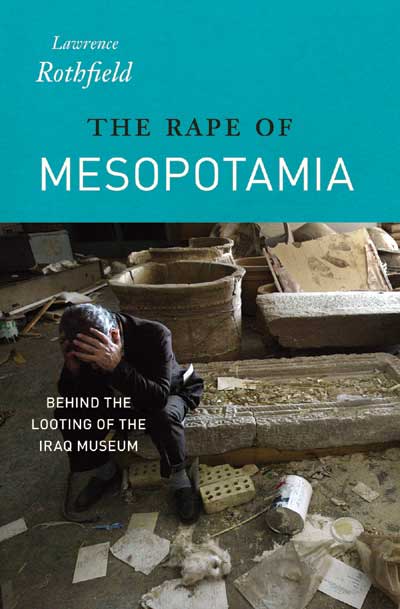 The Rape of Mesopotamia is not an exaggerated title, unfortunately. His book is an ‘autopsy of a cultural disaster’, writes Lawrence Rothfield, a former director of the Cultural Policy Center at the University of Chicago, an institution long associated with Mesopotamian archaeology. Indeed he draws heavily on the experience of McGuire Gibson, his archaeologist colleague and a world expert on Mesopotamia. Gibson was the first American archaeologist to warn the Pentagon and the US government, before the American-led invasion of Iraq of 2003, of the possibility of mass looting of museums and sites across the country following the collapse of Saddam Hussein’s regime—which, ironically, had controlled looting for decades with the death penalty for culprits.

Rothfield, by contrast, did nothing to avert the disaster before the invasion. Although he is not an archaeologist and has no professional connection with Mesopotamia, he still feels some responsibility, given his official position at the time. The university had connections with several key figures rooting for the war, including Paul Wolfowitz, Ahmad Chalabi and Donald Rumsfeld, yet it did nothing to try to guide them. ‘This book arose from an intense feeling of guilt. As news surfaced in April 2003 that the National Museum of Iraq had been looted, it struck me that I had been asleep at the wheel’, Rothfield’s preface opens. ‘The missed opportunities for linking up Gibson directly to these movers and shakers haunt me to this day.’ By describing and analysing what happened in the US, Britain and Iraq in 2002-03, as well as Afghanistan, and in the half-decade since then, Rothfield hopes that lessons will be learned and mistakes not repeated during future armed conflicts.

Politics is therefore at the centre of this book, not archaeology. Rothfield fingers politicians, government officials and military planners, inevitably, but also archaeologists, museum officials and antiquities dealers and collectors. On the American side, and to a lesser extent the British side, this is a sorry tale of philistinism, incompetence and greed. President George W. Bush made only one public comment on the looting of the Iraq Museum. Naming many names, Rothfield devastatingly documents ‘general indifference to cultural heritage protection in the foreign policy and defence establishments; conflicting agendas between military planners and archaeologists regarding the scope of the military’s responsibilities for protecting cultural heritage; international legal conventions that do not adequately address the relatively new problem of looting by civilians; the siloing of crucial information within pockets of the bureaucracy; the narcissism of archaeologists who fail to see the difference between conserving a site and securing it from looters; a paucity of ongoing links, personal as well as formal, between cultural heritage organisations and archaeologists, on the one hand, and defence policy makers and military operations planners, on the other; and a community of collectors, dealers, and museum officials that for the most part has paid nothing more than lip service to a problem that its own appetite for antiquities has created.’

Thus, the American military did nothing to prevent the looting of the National Museum on 10 April 2003. They could probably have stopped it without much difficulty, but they had been instructed to engage only with Iraqi military forces, not with civilians. When Donny George Youkhanna, head of the museum’s research department—and one of the handful of staff remaining in the threatened building—made a direct appeal to the Americans on 13 April, he was told by Lt. Col. Peter Zarcone, the civil affairs officer for the First Marine Infantry Division, that he should right away return to the museum and await the imminent arrival of an army unit. Zarcone immediately scribbled a handwritten pass for George (reproduced in the book) to help him get through the security checkpoints. However, the military did not reach the museum until three days later, on 16 April. The delay seems to have been caused by the fact that the museum was not in the marines’ sector of Baghdad, but in the army’s sector.

Steps were immediately taken to try to retrieve looted art objects before they left the country. George and his staff fanned out to local mosques and appealed to their imams for help, with some success. In the US, the Association of Art Museum Directors appealed for the establishment of an amnesty program with financial incentives. Philippe de Montebello, director of the Metropolitan Museum in New York, urged Unesco to create an amnesty fund, which it did. But neither the Association, nor the Metropolitan Museum, nor the American Council for Cultural Policy—an association of curators, collectors and dealers—nor any private collector (‘so far as can be ascertained’), made any contribution to the fund or to any other initiative on behalf of the National Museum of Iraq. This, despite the fact that in 2007, a single Mesopotamian artifact sold for $57.2 million—the highest price ever paid for a sculpture or an antiquity. The only funds came from the British School of Archaeology, the British Academy and, more generously, the Dutch government’s Prince Claus Fund.

No one—with the possible exception of archaeologists like McGuire and George—comes out of this story with reputation enhanced. But what is especially troubling is that leaders supposedly fighting on behalf of civilised values in the ‘birthplace of civilisation’ so signally failed to consider the cultural aspect of the war.

Review by Andrew Robinson is the author of Writing and Script: A Very Short Introduction, published by Oxford University Press in August, and Lost Languages: The Enigma of the World’s Undeciphered Scripts.