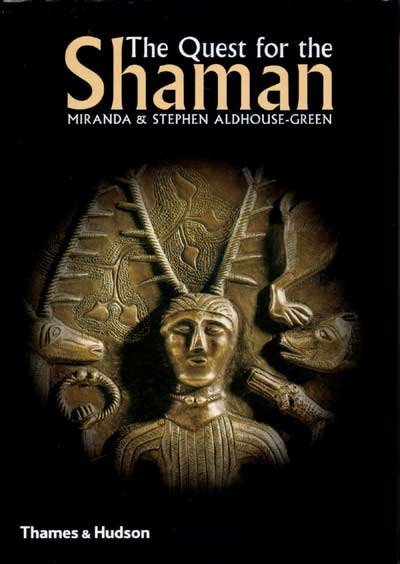 ‘This book is a quest for evidence of shamanism’ write co-authors Professors Miranda and Stephen Aldhouse-Green.

And yet, before their quest even begins they have a hard time defining what they mean by ‘shamanism’. Indeed, they point out that one scholar has argued that the notion of shamanism is an entirely invented academic tradition, even if it is a useful tool for describing a pattern of ritual behaviour and belief currently found throughout the arctic and sub-arctic regions of the world.

Thus, the authors do not provide a pithy definition of the ‘shaman’ – they will not accept any loose definition of shaman as simply a ‘sorcerer’ or ‘medicine man’. Instead, they isolate a number of key ‘shamanistic’ characteristics including evidence of trance-like behaviour, of ‘shape-shifting’ (taking on the identity of other species), and of ‘two spirit’ people (those who constantly move between two worlds).

They then attempt to identify such ‘shamanistic’ behaviour in the archaeological record – via artistic representations, burials, and also the equipment that might have been used by shamans, such as divining tools, gongs to call the spirits, or lot-casting devices.

To me, it seems that ultimately they are simply searching for erstwhile ritualistic and religious behaviour, which they couch under the rather alluring buzz-word ‘shaman’. After all, modern state-sanctified religions have many attributes that might seem to be ‘shamanistic’ to the non-believer; for example, communication with other worlds (or God/s), or the movement into ecstatic states during prayer or meditation. Yet it is only the so-called pagan religions that would be categorised as shamanistic.

Problematic definitions aside, in searching for lost religions and former ritualistic behaviour, the authors succeed admirably. In 220-plus pages they take in a host of disparate archaeological remains from across the world and through time – starting in the Palaeolithic and ending in the 7th century AD. Thus they move from prehistoric African cave paintings to Irish passage graves to Danish bog bodies, and even draw on the Nebra Disc en route.

This is a useful compendium that makes for fascinating reading.