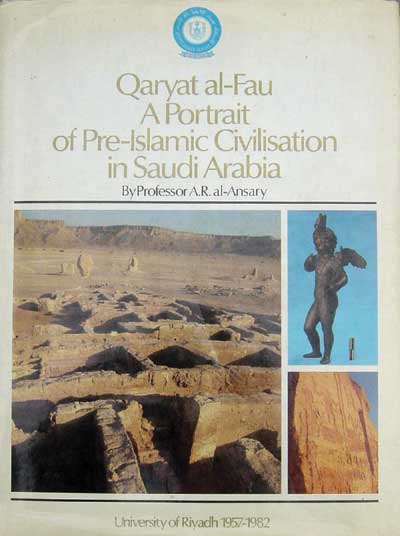 He reportedly received death threats in the 1970s for promoting pre-Islamic history in the Kingdom. During a helicopter trip to the site in 1981, tail-rotor failure at 9,000 feet almost brought his life’s work to an untimely end (mine as well).
Professor Abdul Rahman Al Ansary led excavations during 20 years on the site of Qaryat Al Fau, a Hellenistic settlement on the fringe of the Saudi Empty Quarter. A dedicated archaeologist and teacher, he has sometimes been criticised for not publishing his work. In the absence of other records this copiously illustrated coffee-table book provides a fulsome account of his achievement and his findings.
Sabaean and Nabataean inscriptions indicate that Al Fau was a vigorous trade-route city. It minted its own coinage and had widespread irrigation and grain-storage systems. In the face of increasing desiccation, the site was completely abandoned before 500 AD. Now the many wells of Al Fau are dry. Rain fell one day when I was filming there in the 1980s: it was the first for 20 years. I note, in passing, that not all climate change has been man-made.
Why read this book again? Professor Ansary is long retired. The wind-blown sands are now covering his excavations. I am planning to re-visit the Al Fau area soon as part of the filming of a new archaeological survey of the region. That’s another story. This time the search is for Palaeolithic and Neolithic sites in advance of oil and gas exploration in the Saudi Empty Quarter. Watch this space.
Review by John Herbert, who has made numerous documentaries and films on archaeological and cultural subjects.