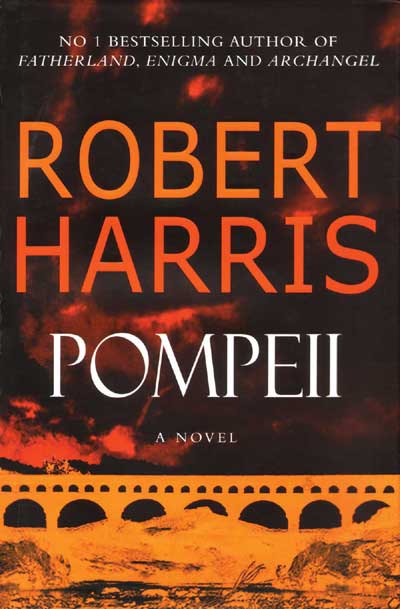 Pompeii has featured in fiction many times. The first-century Roman novelist Petronius set his Satyricon in the Bay of Naples, and one can imagine the grand dinner hosted by the vulgar nouveau riche freedman Trimalchio – the most famous scene in the book – taking place in a Pompeian peristyle. In 1834 Edward Bulwer-Lytton published The Last Days of Pompeii, a lurid vision of a city so morally depraved that, like Sodom and Gomorrah, it was doomed to destruction. More recently there have been detective novels by Lindsey Davis and Steven Saylor with an ancient Neapolitan setting. Now one of Britain’s most successful thriller writers has turned his attention to Pompeii. Robert Harris has followed his international bestsellers Fatherland, Engima and Archangel with a new book called Pompeii: a novel (Hutchinson, £17.99). How successful is it?
The story takes place over just four days – 22-25 August AD 79 – and centres upon Marius Attilius Primus, the leading hydraulic engineer in the Bay of Naples, responsible for maintaining the Aqua Augusta aqueduct. We follow him as he grapples with a water-supply crisis caused by the earthquakes preceding the eruption, investigates a corrupt scam involving misappropriation of public water, and struggles to save himself and his lover as the disaster unfolds. On the way we enjoy a series of cameos that vividly reconstruct life at the time: a vicious villa-owner throwing a slave to his eels; dodgy deals being discussed in a steamy private bath-house; the squalor of a Pompeian brothel; the horrific death of a young woman in childbirth.
There are mistakes. Harris has not quite grasped how totally different the social structure and value system were from those of today: the way, for instance, that what we regard as ‘corruption’ and ‘favouritism’ were the normal way of working. But this is a quibble. Most of the research has been meticulous, specialist readers have been brought in to comment, and the overall result is, in my view, a very convincing portrayal of the world at the time. But more than that. Fast paced and superbly well written, this clever mix of mystery, disaster and ancient history is an absolute page-turner. Pompeii becomes real in this book. You sense the looming menace of the mountain. You wince at the squalor in the back-streets You despise the mafiosi who run the place. You live the whole thing. A perfect holiday novel.