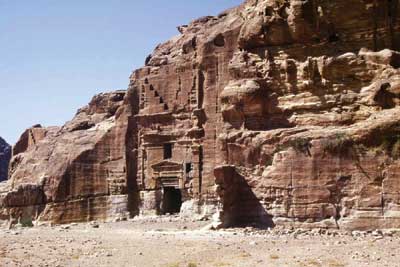 With Petra being the lead article in this issue it is perhaps appropriate to look at a magnificent new book on the subject – Petra Rediscovered. This is an American book produced by the Cincinnati Art Museum and edited by their curator Glenn Markoe. It is a large format gorgeously illustrated volume, but it must be said that it is not exactly a book for beginners. There is, for example, no map of Petra itself and one needs to read it with the Blue Guide at one’s side.
It consists of a number of articles by different authors in two main groups. The first group of ten essays deals with the Nabataeans. The Nabataeans tend to be considered simply as the people who lived at Petra, but in fact they had a far more extensive territory, covering the whole of modern Jordan and extending down into Arabia and up into modern Syria. Indeed the later capital under the Romans was not at Petra but at Bostra, in modern Syria.
There is an excellent essay on the history of the Nabataeans by Glen Bowersock, and I also enjoyed the essay on Nabataean pottery by Stephan Schmid (who is the source of our article on the Soldier’s Tomb). As a good archaeologist I always believe that pottery provides an invaluable insight into the soul of any society, and here we learn that Nabataean pottery does not really begin until around 100 BC – previous to that the Nabataeans were nomadic – and it really ends as a distinctive style following the Roman Conquest early in the 2nd century AD.
The second half of the book looks at Petra itself. And in particular there are valuable accounts of some of the other recent excavations at Petra. There is an account of the French work, for instance, at the huge temple known as the Qasr al-Bint. Then there are the Swiss excavations by Bernhard Kolb on two ‘villas’ on the outskirts of the city.
But above all there are accounts of the American work. There is the excavation of the ‘Great Temple’ by Martha Joukowsky. This is a very odd site which starts off as a temple but where a theatre was then inserted in the far end, and no one quite knows how far it was a temple and how far it was a sort of Town Hall (bouleuterion). One can imagine that the Romans came along and hinted strongly that the Nabateans really ought to be ‘democratic’, so they installed a meeting hall where the decisions of the day could be announced and discussed by the populace.
Then there is an account of the Byzantine church excavated at Petra and its superb mosaics. One of the most fascinating discoveries was a set of carbonized papyri that had been hidden in the church for safe-keeping. These turned out to be the family papers of Theodorus, son of Obodianus, mostly property deeds and tax receipts, individually boring, but collectively fascinating, telling the story of a wealthy family in a changing economy. The papyri are silent about trade, but they are focused on agriculture: the landowners leased many of their fields to vintners, farmers and planters of new vineyards and they derived their income from agriculture, especially from wine, grain and the fruits of their ‘dry-gardens’. In one document, the brothers divided a large dwelling complex into smaller units by creating new entrances and blocking old ones, so that the new units became privately accessible.
But there is also evidence for major underlying changes. One of the great mysteries to me is the sudden expansion of Islam in the 7th century. But here the underlying changes were already taking place a century before. Although the documents are written in Greek, the evidence from place names and personal names suggest that the old Nabatean language (Aramaic) had been replaced almost completely by Arabic and that Arabic had become the language that ordinary people spoke. Some of the taxes were paid to an Arabic chieftain. The Arabs were the federates (foederati) – a very similar situation to that in England, with the Anglo-Saxons gradually taking over. The expansion of Islam should not have been a surprise: the underlying changes – the Arabicisation – had already taken place.
The whole book is full of lots of glorious colour pictures and indeed plans. For anyone who wants to make a serious study visit to Petra, or indeed to catch up on what they saw at Petra but did not really understand, this book is a treasure.