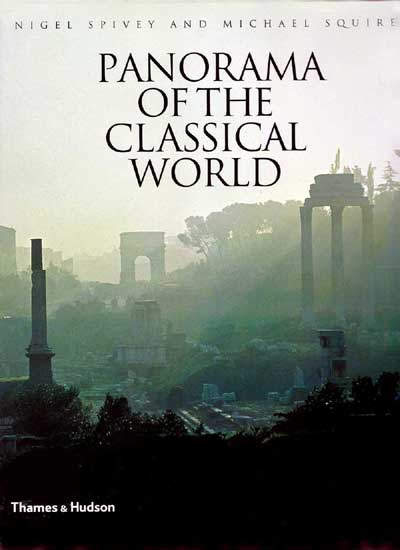 How do we present the Classical world to the world of today? In Panorama of the Classical World, (Thames and Hudson, £29.95), Nigel Spivey and Michael Squire, both from Cambridge, present a lavishly illustrated account of ‘Classics for a new generation’. The book has splendid illustrations, many coming by courtesy of the Getty Museum, and is presented by Thames and Hudson in their usual elegant style. How far does it succeed?
I must confess that my judgement in such matters is becoming increasingly affected by my experiences in editing Current World Archaeology. Throughout, I find myself saying ‘yes, well, fine, but how does the Classical world compare with the rest of the world? What is new? What is different? How far, if at all, was the Classical world better, or at least different, to the other great civilisations of antiquity?’
The new book presents a mélange of different topics. An opening chapter on ‘Mortals’ has a fascinating section on ‘Erotics’, with some interesting new scenes from Athenian vase painting. The chapter on ‘The Gods’ emphasises the ‘messiness’ of the Classical pantheon – they were always bringing in new gods but there was also an urge to represent higher powers in visual form by making statues which was a pretty unusual characteristic. There is a chapter, in many ways fascinating, about mythology. Yet what is unusual about Classical mythology is surely its rationalisation. In most other cultures myths are very closely bound up with religion and are not to be trifled with; what is unusual about the Greeks is that from a very early stage they were prepared to laugh at their religion. Myths became something to invent or twist to ones own purposes – as Euripides did so splendidly in his plays.
The authors then move on to a chapter on ‘Manipulating Nature’. They start off by pointing out the importance of land ownership in the Classical world, but what they fail to point out is how unusual the very concept of land ownership is. In most primitive societies, land is held communally, as indeed in Medieval England with its common field agriculture. This is one of the unusual and important aspects of Classical civilisation.
The next chapter is called ‘Political Animals’, but again they do not point out how unusual a Classical city is. Instead of the ‘barbarian’ city with a palace or fortress at the centre, at the centre of the Classical city is the market place. The market place was the great distinguishing feature of the Classical world, yet they brush the market functions aside with a brief mention of ‘the market stalls and stores’. And, incidentally, they barely mention Sparta, the other great power of Classical Greece, and yet it was a city where the usual Greek ideas of politics did not apply. Sparta was different; we need to ask – why?
But it is in the chapter on ‘Oikos and the Economy’ that I have my gravest differences. They rightly point out that oikos, the Greek word for house or household (from which the word economy is derived), was the centre of production. But how did this differ from other societies? In barbarian societies, the household was usually dependent on the palace. But the Classical world was a property owning society, where the householder owned his own house, produced his own goods, took the surplus to the market place where he sold it for money, and then used that money to purchase the goods that he needed. They rightly quote Cato to the effect that the farmer was the lynchpin of Roman society, but it is this sturdy independence that makes the Classical farmer so important – and why they are different to farmers in other societies. There is also the usual discussion about slaves. Sadly, the authors have clearly not read the ostraca (writing on pot sherds) from Mons Claudianus which show that these huge quarries were not worked by slaves but highly skilled free workers. Our whole outlook on slavery in the classical world needs to be rethought: Marxism puts slavery at the heart of its explanation of the Classical success – but Marxist theology should no longer be accepted so uncritically.
And finally, when did the Classical world come to an end? In their last chapter, they take a very patronising view of Gibbon and his Decline and Fall of the Roman Empire, saying ‘It is no longer tenable to think of the end of Classical antiquity as some terminal switch plunging Europe into a gloom of Dark Ages’. This is very naughty: no-one has ever seen the end of antiquity as a ‘terminal switch’ – certainly Gibbon did not. But the world of AD 400 was still Classical, whereas the world of AD 600 was not. Surely, one cannot provide a panorama of the Classical world unless one is prepared to say how and why it came to an end.
I am, no doubt, being unduly unkind. This is a work full of challenging ideas reflecting the best of contemporary thought in the Classical world. But I studied the Classics myself and believe deeply that the Classical world was something new and exciting and important. I just think that the authors, and indeed the Classicists of today, do not do a very good job of presenting our case.