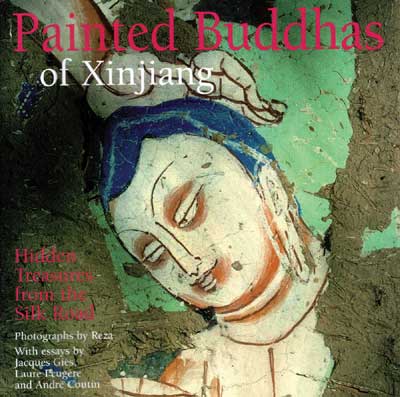 After 30 long years in negotiation with the authorities, the photographer Reza was finally granted permission to visit and photograph inside a series of caves hidden under the mountains of Xinjiang in former East Turkmenistan. The reason for his persistence is that the caves are adorned with an extraordinary bonanza of Buddhist art. Reza has become the first Westerner to make a record of it, and this book, crammed with his photographs, is the end product.

The still-vibrant frescos were produced by monks of the kingdom of Kucha between the 4th and 7th centuries AD, and were intended as a focus for pilgrimage and prayer. As Reza’s book illustrates, they depict scenes from Buddhist mythology, including the story of the Buddha Shakyamuni and his previous lives. From the pages leap flying angels, malicious demons, noble princes, musicians, hunters, and ordinary people, that are at once astonishing and utterly compelling.