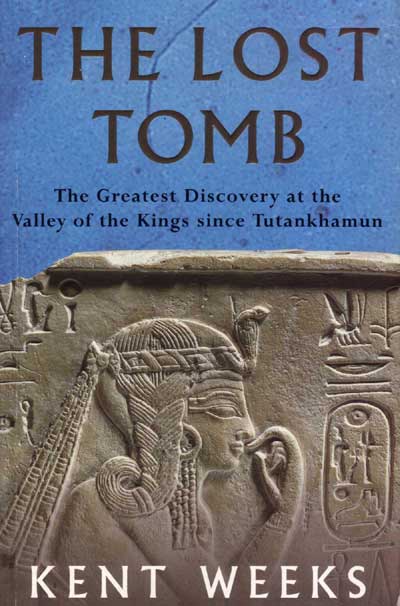 One cannot leave the story of KV5 without looking at some of the literature it has produced. First and foremost is Kent Weeks’ own account of the discovery of the tomb. The Lost Tomb is one of the best archaeological books I have ever read. I bought it to read during our trip to Egypt last December, but before I had really got into it, I lent it to my wife to read a paragraph. She was immediately hooked and would not give it back until she had finished it right to the end, tantalising me by reading out some of the best passages. When I eventually got hold of it again, I soon found the reason for her fascination.

It takes the form of an autobiography. Kent Weeks begins with the story of his early life, starting in the outskirts of Seattle, where his father was a policeman. He decided to become an Egyptologist at the age of eight, went to the university of Washington in Seattle, going on to take his PhD from Yale. Thence he eventually went as Director to the University of Chicago’s Oriental Institute at Luxor, and it was there in 1973 that he conceived his grand idea for mapping the Valley of the Kings, which in turn led on to his discovery of KV5.

The book is a superb amalgam of three themes. There is his own story, and the story of life in Egypt for the past 30 years, both the disasters, notably the terrorist attack in 1997 which took place while he and his team were inside KV5, and the many successes. Then there is the big story of the discovery of KV5 – the Lost Tomb, a triumph of quiet determination, putting together a manuscript in the British Museum with a curiosity to know just where this ‘lost’ tomb was.

Into this he interweaves his third theme, that of Rameses II and the history of Egypt in the New Kingdom: the whole tomb is of course unique, but to explain why he believes it was the tomb of the sons of Rameses II, he has to elucidate who Rameses II was, and his position as (among other things) a successor to Akhenaten.

All three themes are seamlessly linked together, and the pace never lets up. The book is published in paperback by Phoenix (£8.99): buy it and keep it for your next holiday reading – if you can wait that long!

Kent Weeks has also been prolific in masterminding the production of a number of other books, all published by the American University in Cairo. First and foremost is his grand Atlas of the Valley of the Kings: there is a large boxed version still available for £280 on Amazon, though there is now a more manageable smaller-scale ring-bound version which I have before me – even though this is vast enough. The whole thing is in fact available on the web, but it is fascinating to have it in hard copy (£20.70 on Amazon).

His latest book Treasures of Luxor and the Valley of the Kings (£13.26 on Amazon) is also out now.

In addition to Weeks’ books, a particularly ingenious and popular production has been a series of portfolios of paintings by David Roberts. David Roberts was one of the most gifted 19th century landscape artists who between 1838 and 1842 produced numerous fine paintings later published in six large volumes. Some of the finest of these have now been meticulously reproduced in folios of 10 plates each, which make superb illustrations to grace your walls. I purchased The Luxor Portfolio and The Egypt portfolio when I was in Luxor: they are available at £20.93 each on Amazon, – though they are rather cheaper in the bazaars at Luxor.

Then there is the web site, www.thebanmappingproject.com. This is a huge site, the core being the atlas itself, but ranging from advice on how to become an archaeologist, through a history of the geology and archaeology of the area, down to the latest reports of their work. It is one of the most impressive of all archaeological sites on the web, and is especially popular with schools.

Finally the whole project needs to be funded: donations are welcome, so please purchase his books. Indeed, if anyone buys a book from Amazon via links on the TMP website, then the TMP gets a portion of the proceeds.

Note too that every year the Weeks’s personally lead a fund-raising tour of Egypt: it is a little expensive, but then the object is to raise funds – and it is very good!