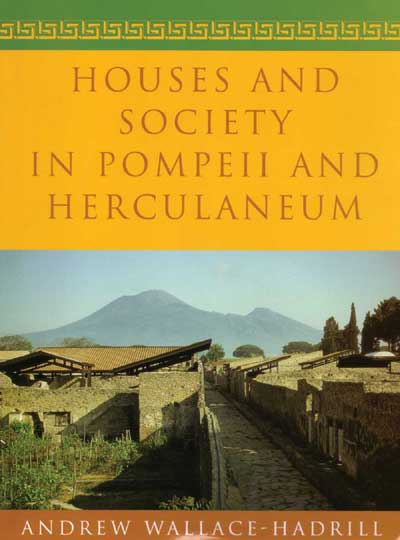 Interpreting Pompeii
Many of the older studies of Pompeii seem rather dry today. Architecture, mosaics and frescoes were classified into types. Houses were distinguished according to whether limestone, volcanic tuff or concrete was used to build them. Architecture was ‘Samnite’, ‘Hellenistic’ or ‘Roman colonial’. Frescoes were grouped into four main styles. These various types were organised into sequences and dates ascribed to each. New examples were then dated using these ‘art historical’ schemes: a circular argument, since the dates of the different types were mere guesses.
Not only was the reasoning dodgy; the whole approach was rather dull. What we really want to know is how Pompeian society worked. In the last ten years a new generation of Pompeii scholars has been using the evidence of buildings and their decoration to reconstruct the fabric and processes of everyday life. Classifying a wall painting as First, Second, Third or Fourth Style now matters less than saying how the images in a particular room fitted together, why the owner chose them, and what impact they may have had on the guests he was so eager to impress.
In Houses and Society in Pompeii and Herculaneum (Princeton, £17.95), Andrew Wallace-Hadrill, Director of the British School at Rome and a leading Pompeii scholar, explains how the grand houses of Pompeii were carefully designed status-symbols for the political elite. Earlier Greek houses, such as those excavated at Olynthos in the north Aegean, tended to be modest private residences of uniform size. Pompeian houses in the last two centuries of the city’s existence were, by contrast, varied in size and, where resources permitted, lavishly decorated: evidence that the gap between rich and poor was widening, and that competition at the top was intense. Keen to attract clients and increase support, Pompeii’s aristocratic politicians needed to look rich and fashionable, so they frequently remodelled their houses to incorporate new design features and the latest style of decoration. The arrangement of domestic space – ‘the articulation of the house’ – was finely nuanced. Some areas were more public than others, some more grand. The status of visitors could be symbolically represented by the degree of access they were granted: was it only to the atrium and tablinum at the front of the house; or to the more private peristyle and triclinium at the back; or perhaps, if they were close friends and social equals, to the private bedchamber, the cubiculum, of the master of the house?
What of the lower orders? Unlike modern cities – and many medieval ones – Pompeii was not zoned by social class. There was no division into ‘affluent’ and ‘poorer’ neighbourhoods. Rich and poor lived in the same houses or at least in the same city-blocks. ‘The ‘promiscuous crowd’ of the traditional atrium house was … its natural condition,’ explains Wallace-Hadrill. ‘The big house was simultaneously source and symbol of wealth: the ‘extras’ living with the nuclear family were both a source of income and a sign of social power.’ There was, around the great family, a ‘penumbra’ of other people: dependent relatives, live-in clients, household slaves, freedmen employed as business managers; and many of the street-front rooms, often with bedsits on an upper storey, were let out to artisans, traders and lodgers. ‘Workshops and reception rooms, profit-making and luxury, might sit alongside each other in the same house.’
Pompeii was not a capitalist society, however. The evidence does not support the old idea that nouveaux riches entrepreneurs had displaced the traditional landowning aristocracy in Pompeii’s last years. Ancient towns were not like medieval ones, where guilds of merchants and artisans were eventually powerful enough to challenge the feudal rulers of the countryside. The Roman elite was always a class of landowners who chose to live in cities. Those who made their fortunes in the city aspired to enter the aristocracy by buying land and making themselves ‘respectable’. There were no factories, business parks or captains of industry in ancient Pompeii. Rather, commercial premises were small units owned and let out by the great families on their street-frontages; no doubt they got a cut.
Two great strengths of this study are, first, that it is based on a quantitative analysis of 234 houses in three different areas (unlike most earlier work, which was impressionistic rather than statistical), and second, that Wallace-Hadrill is firm about the importance of letting the evidence speak for itself and not importing modern assumptions about the city into the way in which we ‘read’ Pompeii. The result is a genuinely original and exciting piece of work. My only criticism is that the text is occasionally a little turgid and the obvious sometimes rather laboured; it would have benefited from some stiff editing.