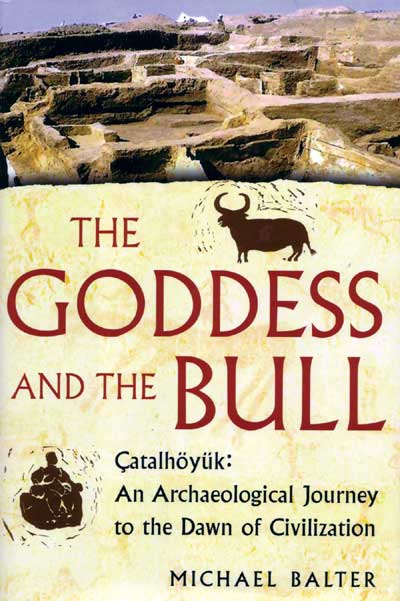 ‘On a cold day in 1958’ writes Michael Balter ‘the history of archaeology, and of our understanding of our own origins, was changed forever’. It was on that day in 1958, that archaeologist James Mellaart discovered one of the world’s oldest towns, Turkey’s Çatalhöyük. And thus began an archaeological odyssey into the origins of civilisation that continues to grip the archaeological world (see CWA 8).
Balter, a veteran science and archaeology reporter, has a rich arena in Çatalhöyük, but his insights are made all the richer thanks to his privileged position on the site. Under its current director, Ian Hodder, Balter has been the excavation’s Official Biographer.
Thus he weaves anecdotes about the site’s excavators (hundreds have dug there) into a study of Çatalhöyük and its place in history. He leaves no controversy or good yarn untouched – particularly interesting is his account of the ‘Dorak Affair’, a story involving a Turkish girl on a train and lost treasures that led to Mellaart’s ousting from Turkey. This all makes for a readable book that is as much an academics’ soap-opera as it is a factual account.
But why the title, ‘The Goddess and the Bull’? The image of the bull, often with horns projecting, appears throughout the site. Indeed it is its rich artistic tradition that gives Çatalhöyük its enduring fascination, and whisked Mellaart into celebrity status.

‘Goddess’ is a reference to the dozens of female figurines discovered there. James Mellaart thought that these statuettes, made of clay or stone, represented a Mother Goddess who was worshipped at Çatalhöyük. This in turn led him to claim that the 9,500-year-old community was a matriarchal society. Consequently, the site, ever a colourful place, has become a pilgrimage destination for many women’s New Age spirituality groups, as Balter’s book details.
But current site director, Ian Hodder, famed for his post-modernist approach to archaeology, questions and often inverts whatever has been said before. Thus he challenges Mellaart’s interpretations that the statuettes are ‘Venus’ figurines (how sorry we feel for those poor New Age women pilgrims). This constant questioning, multi-vocality, and re-analysis of the post-modernist, though philosophically compelling, can sometimes draw one to wonder: is theory the Bull?
So is this the ultimate post-modernist archaeology book? At times, the modern human anecdotes cut so deeply into the archaeology that it is hard to extrapolate clear details about the ancient site from modern stories. In doing so, Balter implicitly flags up one of the ultimate postmodernist positions; namely, that interpretations of the past are never free from the modern cultural baggage of the interpreter. Either that, or he likes a good human story.