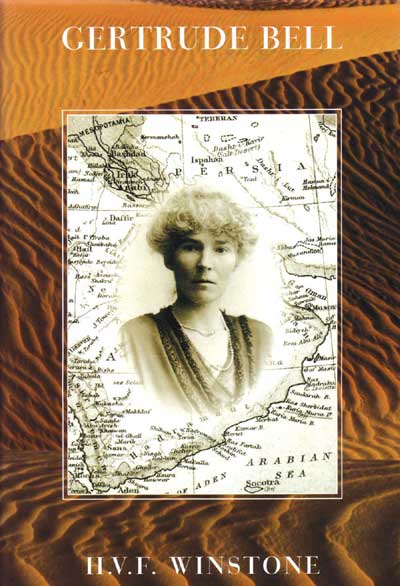 Gertrude Bell (1868-1926) is often dismissed simply as an intrepid lady explorer/amateur archaeologist: ‘The Daughter of the Desert or a kind of schoolgirl’s Lawrence of Arabia’, as H V F Winstone observes in his immaculately researched biography Gertrude Bell. And yet, as Winstone demonstrates, such labels fail to do justice to her or to her achievements.
As the first woman to earn a starred first class degree in Modern History from Oxford University, the beautiful Bell began to rise to heights of influence in a man’s world, a trajectory no doubt smoothed by her fortunate start as the child of an immensely wealthy and well-connected industrialist’s family.
Although not quite as precocious as some, (see our article on Beatrice de Cardi!) Gertrude made her debut in the desert at the age of 32. By the early 20th century, she had become increasingly involved in the archaeological and political affairs of the Middle East. Indeed, during the First World War, while based in Baghdad, she was recruited by British intelligence. Later, she would be the only woman invited by Winston Churchill to the Cairo conference of 1921. And perhaps most significantly to world history, she was instrumental in drawing the boundary lines of modern Iraq; boundaries which have perhaps had ultimately tragic consequences.
Her attempts to fashion Iraq out of the remnants of war and empire have particular contemporary resonance, as do the words that she wrote to her father as British troops entered Baghdad in March 1917: ‘We shall, I trust, make it a centre for Arab civilisation and prosperity’.
The apparent analogies between what happened then, with what happened in 2003 inform this publication which is an updated version of Winstone’s classic 1978 biography of Gertrude Bell. In this edition, he aims to set it within the context of recent events in Iraq. Thus he picks up on lessons learnt, or not learnt, from history, and on theses espoused by Bell that continue to be of the utmost relevance to Middle Eastern politics – such as her forthright opposition to Zionism and the British government’s determination to offer Palestine to the Jews, a decision she tried hard to impede.
Despite the newly-emphasised political context, here is no bald political prose. Woven into the story of her life, the book details Gertrude’s archaeological contribution to the Arabian peninsula.
Bell founded the National Museum of Iraq and was the country’s first Director of Antiquities. Noteworthy too is her considerable collection of archaeological photographs, an important source of information, particularly since some of the sites she visited have subsequently suffered destruction from various sources. A few of these photos are published in Winstone’s biography. Of these, particularly compelling is one taken in 1900 showing scores of Bedouin riding their donkeys through the desolate grandeur of a colonnaded street in Palmyra, Syria.
But in addition to the travel (Bell made two trips around the world), the politics, and the archaeology, we learn much about the woman herself.
Drawing on her personal writings, including over 1,500 lively letters to friends and family, Winstone paints a picture of an affectionate woman, at times yearningly romantic, and essentially blighted by love unfulfilled. Thus she belongs to that troubled band of British desert explorers, to which we might add Lawrence and Thesiger, whose professional successes in the sands were never matched by personal happiness.
In all, this makes for a fascinating read for those who lust after Arabia, archaeology, and adventure.