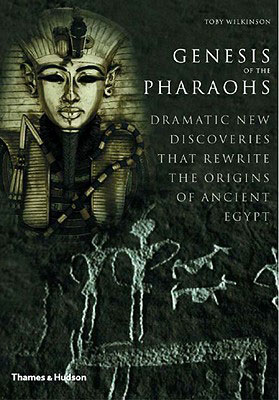 Origins of Ancient Egypt
How did ancient Egypt reach the point of take-off? In Genesis of the Pharaohs: Dramatic New discoveries that Re-write the Origins of Ancient Egypt (Thames and Hudson, £18.95), Toby Wilkinson of Christ’s College, Cambridge, looks to discoveries in the eastern desert.
Since the early 20th century, a number of examples of rock-art have been located in the eastern desert, showing a range of animals and, intriguingly, ships. Many of the animals, such as elephant, and giraffe, are no longer found in Egypt today. In the 4th millennium BC, the climate in North Africa became drier as the rain belt moved south. Before that, the Sahara was much wetter, and thus supported a much wider range of animals; the amount of habitable land contracted, and it is a common assumption that this contraction forced people down into the Nile Valley, and was thus one of the reasons behind the establishment of Egyptian civilisation. Many of the signs too on the rock art appear to be similar to those on pre-dynastic pottery, notably of the Nagada phases, dating to between 4,000 and 3,200 BC, so it is tempting to assign much of the rock art to this period.
The book has been the subject of an interesting display of odium theologicum in the pages of Antiquity, September 2003. The great sin of the author, in the eyes of the reviewer, is that the expeditions into the eastern desert to search for the rock-art were conducted by a commercial travel company, Ancient World Tours, and many of the drawings were made by the enthusiasts who took part in these tours. Yet is this so very different from the work sponsored by Earthwatch in America, which underpins the funding of so many expeditions around the world? True, the book is in places a little over-the-top: the discoveries are not all that new, and much of the re-writing of the origins is not all that new. The book is perhaps a little premature, and in places a little padded. No matter: it is vigorously written, and one suspects that archaeology in the 21st century will depend less on expeditions funded by governments and rather more on expeditions like that of the author.