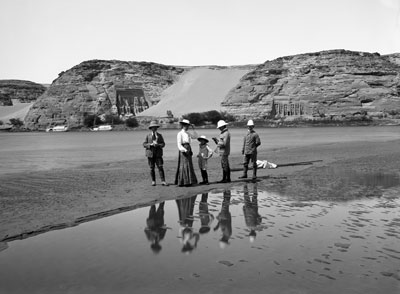 He founded the Oriental Institute in Chicago, was the first American to achieve a doctorate in Egyptology, and his book is an enduring classic a century later. Yet few today even know his name. Here, Andrew Robinson reviews a new biography that should bring James Henry Breasted the recognition he deserves.

James Henry Breasted has several claims to fame. He was the first American to gain a PhD in Egyptology. He wrote a highly influential book, A History of Egypt: From the Earliest Times to the Persian Conquest, which was first published in 1905, became a popular classic, and is still considered by Egyptologists as one of the best introductions to their subject ever written. He played an important role in reading the hieroglyphic inscriptions in the tomb of Tutankhamun when it was discovered by Howard Carter in 1922. He founded the Oriental Institute at the University of Chicago with lavish funding from the Rockefellers. He coined the phrase ‘the Fertile Crescent’ to describe the birthplace of civilisation in the Middle East. He is even claimed by some – if rather implausibly, in my view – to be the model for the intrepid movie character, Indiana Jones, who apparently studied archaeology at the University of Chicago. In 1931, Breasted’s portrait featured on the cover of Time magazine.

Yet today Breasted’s name is probably known only to scholars of Ancient Egypt and the Ancient Middle East – even in the United States. Jeffrey Abt, an art historian rather than an Egyptologist by training, from Wayne State University, is determined to restore Breasted’s popular reputation with his deeply researched and straightforwardly written biography, American Egyptologist. Appropriately published by the University of Chicago Press, it carries numerous period photographs and illustrations from the archives of the Oriental Institute.

Despite Breasted’s exotic choice of subject, Ancient Egypt, and the fact that he took his PhD from a German university, he never made any secret of his pride in being an American. He was born in 1865 in the modest Midwestern town Rockford, Illinois, into a family of no special achievements and limited resources; he was brought up in a conventionally Christian atmosphere with the typical Protestant work ethic of the time, which Breasted wryly called ‘Americanitis’.

For a while, he considered a career in the Church. But soon he was drawn into a more sophisticated, scholarly study of the Bible and its sources in the history and literature of the most ancient civilisations. Nevertheless, religion – whether Christian, Judaic, or Egyptian – remained a driving force in his work; Breasted would never lose his belief in God. In his early forties, he informed an adviser of the religious-minded Rockefellers: ‘The current false impression of the origin, nature, and career of man, gained by the average person largely from religious teaching, has formed a serious obstacle to human progress. My own early training in an orthodox religious home… has made clear to me… how much we need a tactful but uncompromising presentation of the main facts of man’s career.’

Working for his PhD under the leading Egyptologist Adolf Erman in Berlin in the 1890s, Breasted became convinced, like his supervisor, that the available copies of hieroglyphic inscriptions were often erroneous, mainly as a result of the copyists’ faulty understanding of the script.

French Egyptologists – despite their pioneering role in decipherment – came in for surprisingly stringent criticism from Breasted: ‘Their methods are inclined to be slipshod. … The most obvious details escape them, and they hide their distaste for the drudgery of solid research behind a façade of facile, sometimes brilliant, but too often inaccurate generalization.’

This attitude must account for the strange silence in Breasted’s works (echoed, without comment, by Abt’s biography) concerning the copies of inscriptions made by Jean-François Champollion, the French scholar who launched the decipherment of the hieroglyphs in 1822 and thereby, by general consent, founded the science of Egyptology. Ironically, Champollion himself had been driven by his disgust at the inaccuracy of the hieroglyphic inscriptions published by Napoleon’s savants in the volumes of the monumental Description de l’Égypte between 1809 and 1828.

In Germany, Breasted therefore conceived a desire to publish as many accurate copies of ancient inscriptions from the Nile Valley as possible, based on his own fieldwork and that of his collaborators in Egypt. This vastly ambitious project would enthuse him from his first visit to Egypt in 1894 – a working honeymoon – until his dying day in 1935.

The only chance of achieving this goal, he knew, lay with photography, rather than with the drawing of hieroglyphs by assiduous artists – the method used in the 19th century. However, photography of the details of Ancient Egyptian monuments located far away from advanced cities posed formidable problems in the early 20th century, which Abt
brings to life with vivid quotations from the books, field notes, and letters of Breasted.

In one case, a stela high up on a cliff had to be precariously photographed from the masthead of a boat. Another stela, partly buried in drifts of sand, required a trench to be dug along its face. Into this trench Breasted lowered himself headfirst, while holding a kerosene lamp at various angles to obtain a reading.

Photographing the interior of the temple of Ramesses II at Abu Simbel was possible only with sheets of new and very bright sheet-tin angled outside the entrance as reflectors for sunlight. But this method was useless for the temple’s innermost chambers. ‘The men would have to work for days at a stretch in the suffocating blackness… where the air, which had never been changed, was not merely hot but stank unspeakably from untold generations of bats hanging in regiments from the fouled ceilings,’ noted Breasted. ‘Here all photographic adjustments had to be made by candlelight. … The bats would beat out the candle flame or fly into a burning magnesium [light] during an exposure.’ Once, Breasted lost his balance on a granite ledge above the Nile in a terrific wind and fell headfirst more than 20ft onto some rocks below. Having miraculously survived, had his ‘ugly lacerations’ bandaged, and consumed some brandy against the pain, he resumed work.

Much of the appeal of American Egyptologist lies in its portrait of the America of a century or so ago. To keep himself and his family on an academic salary, even at the comparatively well-endowed University of Chicago, Breasted was compelled to give regular adult extension lectures around the country, without contaminating his precious subject too much with the American public’s Egyptomania. Long sections of the book describe the struggle to raise funds for archaeology at a time when the US government gave no grants for scientific research, especially research intimately linked with the humanities. Without the Rockefellers, most of Breasted’s scholarship would have been impossible. All this will make a fascinating read for Egyptologists and those interested in the development of American higher education. But it has to be said that this biography is unlikely to engage the mass readership of Breasted’s lucid and imaginatively written histories of the pre-Classical world.