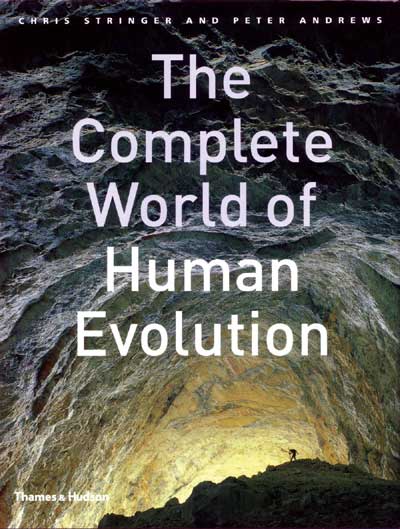 The earliest apes evolved around 20 million years ago, while while Homo sapiens have existed for a mere 160,000 years. The ancient fossil record over this massive time span reveals dozens of species of early apes and humans that create a detailed picture of our evolution. But the picture is itself continually evolving, ultimately requiring revision with each new discovery.

As such, this latest book on human evolution is something of a must-read for those who want an accessible romp through current thinking on the subject. It is written by two of Britain’s best palaeoanthropologists, Chris Stringer – Head of Human Origins at the Natural History Museum, London, and Peter Andrews who formerly held the same position.

This book is part of Thames and Hudson’s Complete… series, and it lives up to its title: dealing, in three main sections, with all key aspects of the study of human and ape evolution.

In the first part, the authors go In Search of Our Ancestors. Here they provide a solid background to the field, the methods of investigation, and introduce six key places central to the investigation of our origins including the Olduvai Gorge in Africa and Boxgrove in the UK. This section also offers a useful and well laid-out Timeline that flags the date ranges, possible relationships and principal species dealt with in the book. Thus the Timeline visually highlights the stark gap in the African fossil record between around 12 to 10 million years ago, and makes note of the lack of evidence for the evolution of most species of ape. This lack, observe the authors, needs to be addressed.

Moving on to the middle section, entitled The Fossil Evidence, the authors deal with many of the thorny issues in human evolution. Key questions include Was Africa the homeland of the Homo Sapiens? Was Asia a corridor or a cul-de-sac? And the old chestnut: What happened to the Neanderthals?

So what did happen to the Neanderthals? Genetic studies strongly indicate that the Neanderthals did die out – although the authors caution that it remains to be seen whether their replacement was absolute. But if the Neanderthals did die out – and the last evidence we have for them dates to around 25,000 years ago – then a raft of other devilish, yet to be resolved, questions emerge: Did we, anatomically modern humans, kill them off? Or was their demise the fault of Mother Nature? Or did they die out as a result of a combination of these factors?

The book ends with an interpretive section that considers such topics as the first artists and evidence to reconstruct human behaviour.

And so, Stringer and Andrew’s book presents the latest thinking and the latest discoveries. They provide an accessible text and harness a gamut of drawings and photographs. This makes for an ideal introduction for bio-anthropology undergraduates, and is an enjoyable and informative read for the rest of us. In fact, the beauty of this book is the way in which the information, at times complex and wide-ranging, seeps into one’s mind as if by osmosis.
Read it and evolve.

(The Editor-in-Chief adds to ND’s review: I think that it is a pity that they do not mention the Aquatic Theory of Evolution, that our ancestors spent 10 million years living in the water, thus losing their hair, among other things – see Elaine Morgan’s The Descent of Woman: they may not believe the theory, but if the book is to be ‘complete’, they should surely have mentioned it.)