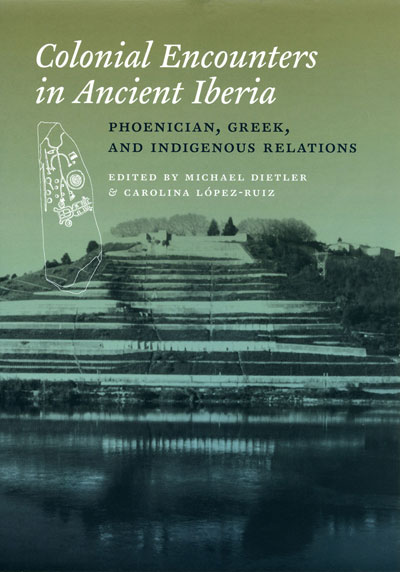 What happens when a ‘superior’ civilization impacts upon an ‘inferior’ one? A test bed for such questions is Iron Age Iberia – modern Spain – where the native Iberians were impacted on, first by the Phoenicians, then by the Greeks, and finally and most decisively, by the Romans. How far did the impact take the form of a full-scale colonisation, the establishment of foreign settlements in the native homeland? How far was it simply trade? And what impact did the outside influences have on the development of the native cultures?

I have just received two books for review that set out to answer these questions. Colonial Encounters in Ancient Iberia is a collective volume of essays published by The University of Chicago press, and Roman Iberia by Benedict Lowe, which deals with the later period and is basically an updated version of his doctoral thesis.

Discussion of Iberia in the Iron Age always seems to begin with the fabulous Tartessos, which is mentioned by a number of Greek writers and has even been supposed to be the biblical Tarshish. But just what was Tartessos? Tartessos was essentially a highly successful local culture that struck it rich. It was centred in the area to the north of Cadiz, around the modern town of Huelva, but became fabulously rich based on the exploitation of its mineral wealth, both silver and tin. The Phoenicians were desperately keen to get the silver, and their payments fuelled the expansion; they were also able to incorporate a number of advanced influences in their society. But Tartessos clearly remained independent, having its own non-Indo-European language and its own writing.

There are other signs of Phoenician influence along the coast, but it is argued that none of them are sufficiently ‘Phoenician’ to have been actual colonies – they were essentially trading settlements. Nevertheless the Phoenicians had a substantial influence on the local culture where roundhouses appear to have been replaced by rectangular houses (a mark of civilization?) There is also a more subtle change in eating and drinking habits, with the introduction of wine drinking as a form of social inclusion. But in the 6th century BC there was a ‘crisis’ and everything collapsed: the reasons are unknown.

In the 5th century there begins to be a strong Greek influence in the form of Attic pottery which in places was imported in such amounts that between five and ten per cent of the pottery assemblage is Attic. Then the Greek link appears to grow weak, possibly because they were frozen out of the West Mediterranean by the Carthaginians; though neither book says much about the Carthaginian episode when Hannibal and his family had their headquarters in Spain as much as in Carthage.When the Romans finally defeated the Carthaginians, they found they had also acquired a new empire in Spain. This expanded rapidly, and in Roman Iberia Bernard Lowe looks at this expansion with the proliferation of villas throughout the Western seaboard, and the introduction of olive oil and the exploitation of fish foods. The early 1st century AD saw a dramatic increase in the volume of olive oil production, but by the end of the century there are signs of recession and Spanish olive oil imports are replaced by oil from Tunisia and North Africa. But by this time the massive increase in wealth had had its effect and, in the 2nd century AD, Spain was wealthy enough to produce several emperors.

Indeed, the most interesting chapter in the Chicago volume comes from Ramon Buxó, a botanist who looks at the effects of the colonisation from the farming point of view. The main change is the introduction of the vine and the olive, and the consequent intensification of agriculture. Pastoralism declines, a new range of improved and better cereals are introduced, and there is also considerable deforestation. In another outstanding chapter, the independent scholar (and professional fund-raiser) Brigitte Treumann wonders whether the Phoenicians did not come to the Mediterranean shores for timber rather than for metals, for metals do not exist on the eastern side of Spain.

The problem with both books, to my eyes, is that they are both written the wrong way round: they are written from outside-in rather than from the inside-out. I would like to start with the native peoples of Spain and study their trajectory: how they were developing and then how they were affected by the outside influences.

True, several of the contributors look at the impact on the indigenous population, but they do not have the space to depict the whole background of the Iberian peoples. Both books have far too much ‘theory’, dealing with colonialism in a sub-Marxist fashion. Unfortunately this ‘theory’ tends to act as a blinker which prevents them, for instance, from looking at the other external influence in Spain at this time: the Celts. There is a long standing problem about the ‘Celtiberians’ mentioned by the classical authors, and there is clearly some Celtic influence in much of north-west Spain. I would have liked to have had the latest views on this subject.

Of the two books, the Chicago volume is by far the better written; even though it consists of separate essays, nevertheless almost all are readable. I am afraid that Roman Iberia shows too much its origins as a doctoral thesis where the author seems determined to plough through every minor site in the whole province — the book is a very difficult read. But between them, they give a fascinating insight into the problems that arise when a ‘superior’ culture impacts on an ‘inferior’ one, but is nevertheless not powerful enough to impose its own ways completely.