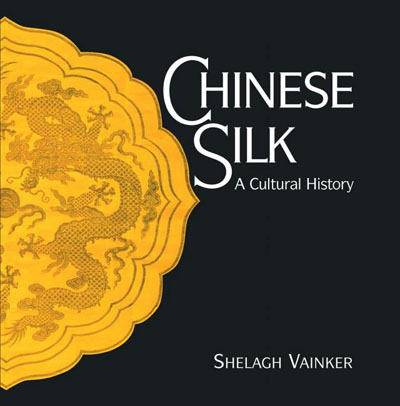 Silk is one of the more complex luxuries. It is not just a matter of cultivating silk worms – it is also essential to cultivate the mulberry leaves on which they feed. You then set up a series of racks containing trays covered with mulberry leaves on which the silk worms feast. You then extract the silk from the cocoons, spin it, weave it and sometimes paint on it. You then use it to pay your taxes.
The Chinese began to cultivate silk way back in the Neolithic and the first fragments of silk go back to the Bronze Age and the Shang Dynasty. However it was with the great Han Dynasty in the two centuries before and after the birth of Christ that silk production really began to be organised. So much was produced that it became a commodity: it began to be used as a medium in which taxes were paid, and even servants dressed in silk. It began to be exported, and the ‘Silk Road’ was established whereby China came into contact with the civilisations in the West, desperate to get hold of this rare, exotic but exceedingly desirable material.
However, it was with the Tang Dynasty from the 5th to 8th centuries AD that our knowledge of silk working really expands. One wonders how far this is due to Sir Aurel Stein and his wonderful discoveries in Central Asia, which shipped back to the British Museum the samples of Chinese Silk on which so much of our modern knowledge is based. This was a time when Buddhism, which had reached China from India via the Silk Road, began to form an important motif in silk production.
But it was with the Ming Dynasty from the 13th to the 16th centuries that silk production became industrialised and silk began to be collected as an art form. Artists too liked silk as a base medium: whereas in the West, we are used to the idea of artists painting on canvas, in China they preferred to paint on silk.
In Chinese Silk: a cultural history, Shelagh Vainker, formerly at the British Museum but now at the Ashmolean Museum, Oxford, has produced a splendidly elegant book, marvellously produced with lots of full colour pages of silk objects. This is not just a history of silk but it is combined with a general background to Chinese history, with frequent cross comparisons with other Chinese luxuries, notably porcelain. For those interested in China and Chinese silk, this is a book to acquire and treasure.