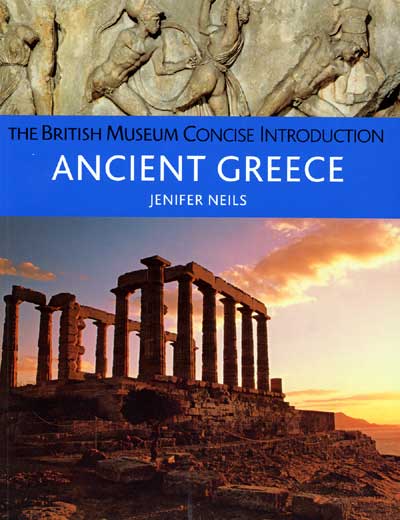 What was the ‘legacy’ of the ancient Greeks? The answer, of course, is very little: an alliance of Greek aristocrats, Hellenistic kings, and Roman viceroys drained the wellspring of Greek civilisation when they destroyed city-state democracy. Never mind. We still have the ‘invented tradition’ of the Greek origins of western civilisation to ensure abiding interest in this most fascinating of ancient worlds. Those with little knowledge of ancient Greece are aware of a gap, and the demand for books for the general reader remains high. Here are two different books that offer a similar service: providing a beginner’s introduction to the world of ancient Greece. How well do they succeed?

Jenifer Neils is an American-based academic specialising in archaeology and Greek art. It is the latter that dominates The British Museum Concise Introduction to Ancient Greece, supported by the sort of sumptuous illustrations one expects of a British Museum publication. Coverage is good – with chapters on the Bronze Age, the Archaic Age, the polis (city-state), the oikos (household), religion, festivals, colonisation, and the Hellenistic Age – and the book certainly has its uses. But format and style are sometimes a little uninspired for the general reader. To start the book with a chapter on the history of antiquarian scholarship entitled Rediscovering ancient Greece is not ideal. And there is a problem of ‘bitty-ness’ – a lack of true synthesis and historical context. The chapter on colonisation, for example, looks at Greek settlement at all four points of the compass, but provides no analysis of the dynamics of Greek expansion in general terms. For an introductory volume, there is too much description and not enough interpretation; at the end, we still do not know what powered this extraordinary civilisation.

Stephen Batchelor’s The Ancient Greeks for Dummies has no pretension to academic status, and yet, notwithstanding its textbook layout and jocular style, it is a mine of both information and insight. A book like this might have been written by a jobbing hack and filled with howlers. Instead, though Batchelor is a new author, the text reveals abundant evidence of deep and thoughtful scholarship. He clearly has a tremendous ‘feel’ for what the ancient Greeks were like and how their world fitted together. No doubt it helps that he has been teaching ancient history and classical civilisation to adult education students for years, leaving him refreshingly free of academic stuffiness. We may be hearing more of him.