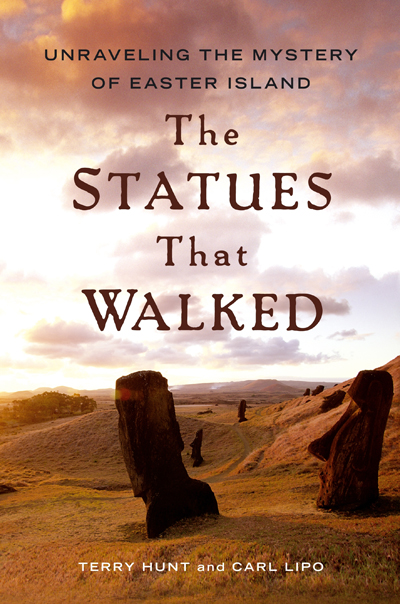 The enigmatic moai that brood over Easter Island (Rapa Nui) in the South Pacific are one of archaeology’s great mysteries. When Europeans arrived in 1722, an estimated 3,000 seemingly impoverished people and numerous moai dwelt on the islands. Almost immediately, the mythmaking began, of a once prosperous, statue-building society that dissolved in the face of deforestation, food shortages, and endemic conflict. The island has also acquired notoriety as a textbook example of seemingly catastrophic ecological collapse. Now, Terry Hunt and Carl Lipo, respected archaeologists with broad experience of other Polynesian islands, have brought a fresh eye to bear on Easter Island, and this book summarises their research eloquently for a wider audience.

They caused a seismic shift in island history by their excavations at the stratified Anakena Beach site on the north-eastern shore: they uncovered the original land surface where Easter Island palms grew densely. Here, the earliest human occupation dated to about AD 1200, centuries later than previously accepted dates for first settlement in the 1st millennium AD. Not only did the later date conform well with numerous other precision dates for canoe voyages across Polynesia, but newly completed pollen studies confirmed the first human interference with island vegetation to the same time-frame.

Easter Island was effectively treeless in 1722. Most theories attributed rapid deforestation to promiscuous human cutting. Hunt and Lipo use research on Hawa’ii to suggest that rather than people, fast-breeding Pacific rats that flourish alongside humans gradually deforested the island, until almost no trees survived at European contact. How, then, did the islanders survive in such an impoverished setting, when they lacked two Polynesian staples – dogs and pigs? Satellite and ground surveys provided a satisfying answer. It turns out that the islanders used rock-walled circles to protect crops like bananas and taro in waste-enriched soil from dehydration and the wind. Ground surveys located at least 2,550 circles, some still in use, that once enclosed over 10% of the island’s surface. The islanders also practised stone gardening over almost half the island, placing rocks around plants to protect them and retain moisture, a method familiar from many arid parts of the world. As the forest declined, the authors tell us, so the islanders transformed the now open terrain into an endless series of gardens. They were able to survive reasonably comfortably and sustainably. The authors also debunk the popular notion that Rapa Nui was consumed by internecine warfare.

Why, then, did they carve and erect moai? Hunt and Lipo mapped paths that radiate outward from the quarry where the statues originated. They argue that carvers from different groups worked alongside one another, each hauling their statues along often poorly defined, even idiosyncratic, paths. Contrary to earlier theorising, they argue that statue building and transport was not in the hands of powerful chiefs, nor did it consume much valuable timber. Each statue was ‘engineered to move’, standing upright. It ‘walked’, and was designed to do so with the help of small numbers of people. (The discussion of the physics involved is fascinating.)

But, if there were no powerful chiefs, and people lived in dispersed settlements, why did they expend so much effort on huge statues? Here the authors rely on evolutionary theory: cooperation between independent groups was the most effective strategy for survival in a place where people maintained a delicate balance between food supplies and population size. This cooperation may have been reflected in the construction and erection of moai, as perhaps did those rituals associated with them that are lost to us. Hunt and Lipo argue that far from collapsing in the face of ecological disaster, Rapa Nui society actually flourished until confronted by European visitors, who brought epidemic disease and other familiar evils with them.

The Statues That Walked is a beautifully written, closely argued account of Easter Island history based on sophisticated multidisciplinary research. As the authors freely admit, much detailed inquiry lies ahead to fill out the details and to confirm some of their hypotheses. In the meantime, this important book will doubtless cause agitated fluttering in the comfortable dovecotes of academia. But for the general reader and those lucky enough to visit Rapa Nui, it offers a compelling alternative to the ecological Armageddon so popular in the literature.