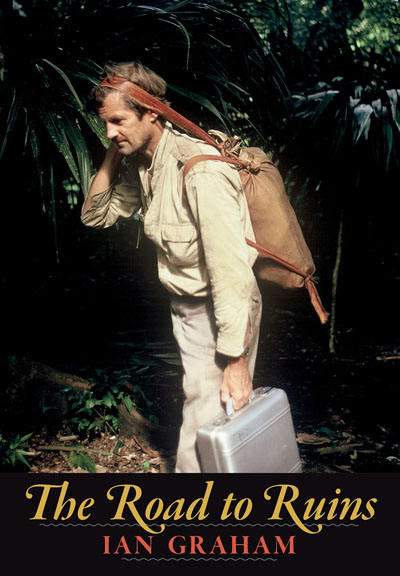 The most avidly acquired antiquities of the New World during the last 50 years have been Maya relics from Mexico and Central America. Countless sculptures and artefacts unearthed at archaeological sites have gone to the museums and private collections of richer countries. At first, the traffic was slight; but in the 1960s it rose to scandalous levels. In spite of protective laws in the countries of origin, looters were ruthlessly pillaging and destroying remote ruins, a vital cultural loss; stolen objects were taken from their archaeological context and hieroglyphic texts cut up and dispersed as isolated objets d’art. Decoders of Maya writing and subsequent readers of it have suffered by this, for we now know that many inscriptions have historical content.

Into this scene of vandalism came Ian Graham. He first visited the Maya area in 1959 and immediately became a devoted Mayanist, seeking out sites and sculptures in forests far less penetrable and inhabited than they are today. Becoming aware of the wholesale looting, he began to record and protect the monuments. Like many 18th and 19th century explorers before him, Graham was a Gentleman Amateur. His enthusiasm was funded for years by other jobs and helped for a time by a fortunate windfall. The disquiets of being financially self-propelled are offset by the pleasures of independence: one can set one’s own goals. Graham’s goal was to record pictorially every surviving Maya inscription.

Lack of an appropriate supporting institution did not deter him from establishing friendly relations with the archaeological authorities of the host countries, particularly Guatemala. If he saw a need for guardians at newly discovered (and often newly looted) monuments, he knew whom to ask. He wrote up his work, made competent surveys, took photographs, and made drawings. He was in touch with Mayanists at Harvard University’s Peabody Museum, the Carnegie Institution of Washington, and the state archaeologists of Guatemala and Mexico – who trusted him to make emergency repairs at damaged sites.

Ian Graham became a respected authority. His enthusiastic protection of Maya monuments and artefacts, including encouragement of poorly paid site guardians, gave some pause to looters, although the dangers persisted: one of his Guatemalan guides was shot dead by thieves when Graham surprised them at their work. His disapproval of the illicit trade in stolen artefacts was felt in every country and extended at last, and not before time, to the leading international auction houses. These he persuaded to cease handling undocumented Maya objects, which they had formerly been happy to catalogue without provenance or enquiry. The police were increasingly involved, thieves were prosecuted, and stolen stones repatriated.

After years of working on his own account, he was invited in 1964 to make a survey at Seibal in Guatemala for a Peabody team. Four years later, the Peabody Museum gave him space in which to set up the Corpus of Maya Hieroglyphic Inscriptions. Meanwhile, the decoding of Maya writing was prospering at various institutions, greatly helped by the Corpus’s ever-increasing material, much of it assembled by Graham himself. He retired in 2004, having directed the Corpus for 36 years.

The author is a determined person. The first part of this autobiography modestly suggests that this is an inherited characteristic. He had an affectionate upbringing, his family crowded with people of exceptional character and interest. After attending Cambridge University, he spent two years of war in the Royal Navy before going on to Trinity College, Dublin. The variety of jobs he held in his early years enabled him to acquire a considerable knowledge of engineering and physics – skills he put to good use when raising, mending, and moving the colossal carved stones of the ancient Maya.

Charmingly written and well illustrated, this book has the excitement and enthusiasm of a journal: it speaks intelligently to those with an academic interest in the Maya while being an entertaining account of a fascinating and highly adventurous life.