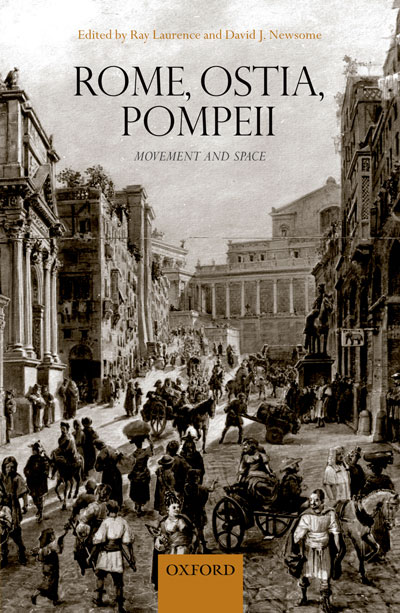 Studies of the past tend to focus on the great sweeps of history, on the elite, and on their monumental buildings. But how did the ordinary person go about their daily life? How did the urban environment affect them, and how were they affected by it? The editors here choose three major cities in which to examine the urban context of Roman city-life: Rome for its rich haul of historical texts, Ostia because it is the subject of recent intense scrutiny, and Pompeii for it vast archaeological record.
The book is a compilation of contributions by archaeologists, classicists, and architectural historians. And, as one would expect, there are as many angles on the subject as there are experts. By investigating, for example, the tracks made by cartwheels it is possible to work out traffic flow, one way systems, congestion hotspots, and rat-runs. Examining legal documents and charters shines a light on potential hazard in these towns – for example, the ban on tethering wild boars, wolves, panthers, and lions (among others) on a public thoroughfare would suggest injury from wild animals was a significant problem before the law was introduced. And how did the local merchants overcome transport problems? Which shops were allowed to display their wares on the street, and why? And how did one navigated oneself through the ancient cities?
By studying historical sources, archaeological data, and architectural research, the authors can determine how these spaces influenced movement patterns in Antiquity, how the needs of citizens influenced the way these cities were built, and, finally, how this impacted on both the economic infrastructure and the governing bodies.
This highly detailed and absorbing study crosses academic disciplines, is, as one would expect from its editors, thoroughly researched with an extensive bibliography, and is peppered with entertaining gems – like the unexpected yet totally appropriate quote from John Schlesinger’s Midnight Cowboy.