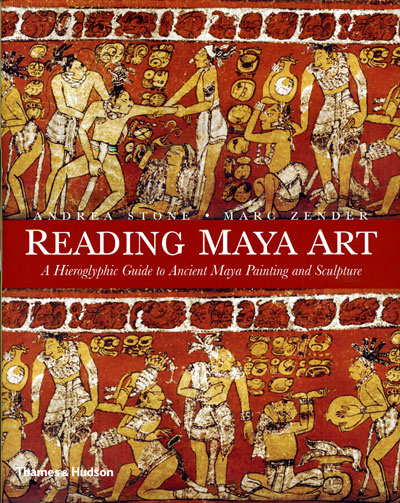 Two decades have passed since the American archaeologist and anthropologist Michael Coe published Breaking the Maya Code (1992). This told the dramatic contemporary story of how the Maya glyphs of Central America were successfully deciphered during the 1970s and 1980s – mainly by North American scholars following a pioneering suggestion in the early 1950s by the Russian scholar Yuri Knorosov, who first demonstrated the existence of phonetic representation in the glyphs. Since then, the decipherment has yielded much new knowledge and has led to the publication of a number of important studies, such as Chronicle of the Maya Kings and Queens (2000) by Simon Martin and Nikolai Grube.

Andrea Stone and Marc Zender’s Reading Maya Art is yet another significant step forward in consolidating the picture of Mayan culture as one of the great civilisations of the ancient world, despite the essentially Stone Age level of technological development of the Maya people.

The unique and fascinating Mayan hieroglyphic script was created some two millennia ago and used until the Spanish conquest of Mexico in the 16th century. It is probably the most complicated writing system ever invented, exceeding in complexity even the ancient Egyptian hieroglyphic script and today’s Japanese script. Like the Japanese kana (which are syllabic signs) and kanji (which are based on Chinese characters), Mayan glyphs combine a fairly small set of phonetic signs that represent syllables with thousands of logographic signs representing words and concepts. Unlike Japanese and Egyptian writers, Maya scribes – who were as much artists as writers – took pride in elaborately joining, blending, and fusing their basic signs. In Egyptian hieroglyphs, ‘naturalistic shapes of depicted objects were rarely violated, whereas obliterating normal shapes for the sake of composition and sign clustering presented little obstacle to Maya artists and scribes’, write Stone and Zender in their densely informative, brilliantly illustrated guide to the interpretation of the hieroglyphs in Maya art.

Partly for this reason, Mayan glyphs baffled Europeans in their efforts at decipherment a lot longer than Egyptian hieroglyphs, which began to be read in the 1820s. Although a Spanish bishop of Yucatán suspected phonetic elements in Mayan books in the 1560s (before burning them as works of the devil), the leading Mayanist archaeologist of the mid-20th century, J E S Thompson, remained convinced, as late as his death in 1975, that Mayan glyphs were not a true writing system, but rather a symbolic notation for a peace-loving people to represent their religious and philosophical ideas. Ironically, when the decipherment took off in the 1980s, it revealed a fearsome Mayan dedication to war and ceremonial blood-letting – like that of the later Aztecs. Even today, however, numerous Mayan signs are partially or not at all understood.

Reading Maya Art is, therefore, the synthesis of an exciting three or four decades of epigraphical and anthropological research by dozens of scholars (including the authors) located mainly in the United States, whose labours are credited at the back of the book. Coe and Martin are warmly quoted on the jacket.

As Stone and Zender note right at the beginning, the book was inspired by Richard H Wilkinson’s Reading Egyptian Art (1992). Wilkinson’s guide offers,
for each of 100 Egyptian logograms, a double-page spread consisting of a page of discussion of a logogram opposite a page of black-and-white illustrations selected from monuments, objects, and papyri, in which the logogram under discussion is picked out from its artistic context in red, so as to aid its recognition. Reading Maya Art, too, offers 100 logograms, such as the glyphs meaning ‘clown’, ‘death’, ‘writing’, ‘cave’, ‘sun’, ‘rubber ball’, ‘centipede’, ‘jaguar’, and ‘cacao’. But it differs greatly from its Egyptian precursor in the choice and grouping of its sign catalogue. For instance, the section ‘Human body parts, movements, positions’ discusses nine Mayan glyphs for ‘blood’, ‘bone’, ‘chop’, ‘front’, ‘penis’, ‘sit’, ‘skull/head’, ‘strike’ and ‘throw’ – only one of which, ‘head’, appears in Wilkinson’s section ‘Parts of the human body’. Thus, Reading Maya Art is in no sense a conventional dictionary, while it nevertheless promises to be a useful reference work for beginners.

The entry for ‘bone’ notes that the crossed bones juxtaposed with a skull appearing in Maya art around AD 900 may be the origin of the Jolly Roger flag symbol adopted by European pirates, who used Yucatán as a Caribbean base from the late 17th century after the collapse of Maya civilisation following the Spanish conquest. Without doubt, death permeated Mayan culture. The greatest Mayan tomb discovery ever made, beneath the Temple of the Inscriptions at Palenque in 1952, was of an unknown 7th-century ruler, whose regnal dates could be deciphered as AD 615-683. His hieroglyphic name was eventually read as K’inich Janaab Pakal, in which pakal means ‘shield’ and is represented by a glyph resembling a shield bearing stretched facial features like a cartoon. As the entry for ‘shield’ points out, this innocuous-looking logogram in fact depicts the flayed face of an enemy taken in warfare – a fate that befell the faces of Spanish soldiers captured by the Aztecs, whose faces were turned into leather masks.