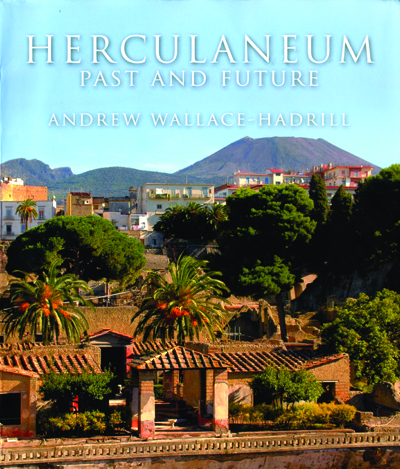 Herculaneum’s destruction is a familiar story. On the 24 August AD 79 Vesuvius erupted, sending superheated mud cascading though the town, killing all before it, and carbonising timbers, foodstuffs, and documents. The helpless inhabitants died in the opening salvo of a geological catastrophe for which the only warning had been an earthquake over a decade earlier. So swiftly, and yet so gently, did the liquid mud swallow the town that poignant tableaus of everyday life were captured intact. In the ‘room of the little weaving girl’ a child’s skeleton lay on a couch, next to the loom where she toiled late into the night by the light of a bronze candelabra.

Yet for all its familiarity, this tale of Herculaneum’s demise is a myth. A myth that is systematically demolished in Andrew Wallace-Hadrill’s latest book: the first comprehensive study of the town in over 40 years. This authoritative, highly readable, and lavishly illustrated account by an acknowledged expert is not a guidebook. Instead, it covers the discovery, reconstruction and fabric of the town, revealing inhabitants we can know better than anywhere else: we can study their skeletons, name almost half of the free, adult male population, pry into their legal affairs, visit their homes, and even sift through the contents of their bowels (see CWA 42).

Although the town was named after Hercules, that well-chronicled hero of Classical mythology, its most famous resident merits only a fleeting cameo in the ancient literature. Cassius Dio records that in 32 BC Marcus Nonius Balbus blocked an attempt to censure the future Emperor Augustus in Rome. This vote of confidence at a critical juncture made an impression, and Nonius Balbus was rewarded with the governorship of Crete and Cyrene. The wealth he accrued allowed him to make a lasting mark on Herculaneum.

Nonius funded a great public building, the Basilica Noniana, was the subject of a heroic nude statue in the theatre – once again risking unflattering comparisons with Hercules – and was commemorated with a seafront funerary altar. But far more striking was his impact on the human geography. Freed slaves adopted their former owner’s first two names, and 25 people called M Nonius are recorded on a fragmentary inscription listing 500 inhabitants, while legal documents provide 25 more. This raises the question of the balance between freeborn and freed. Wallace-Hadrill argues that the inscribed list implies only between a sixth and a third of Herculaneum’s population were born free.

Such a surprisingly small freeborn population would explain the obsession with slaves and their status in the surviving documentation from Herculaneum. Another name on the marble list, L Venidius Ennychus, has provided an archive of legal documents. Amongst these is a declaration dated 22 March AD 62, in which a praetor records giving audience, in Rome, to magistrates from Herculaneum. They reported that now Venidius Ennychus and his lawful wife had produced a child who survived to the age of one, they were citizens. That such an upgrade warranted dispatching an elite delegation to Rome highlights the importance attached to status.

So how, and when, did this mix of free, freed, and slave meet their fate? Wallace-Hadrill points out that 24 August is only one of the eruption dates provided in the various surviving manuscripts, and that another refers to ‘late Autumn’. This would better fit the ripe pomegranates and other unseasonal produce found at the site. It is also clear that the inhabitants were not killed in the first phase of the eruption. Over 300 of them had time to take shelter in underground vaults on the seafront, and when the end came, it did not involve liquid mud.

Pliny records that a plume like ‘a pine tree’ hung over Vesuvius, until it ‘vanished under its own weight’. It was this that slaughtered the inhabitants of Herculaneum. In a late phase of the eruption, pyroclastic clouds heated to 500°C collapsed on the city, vapourising brains with a force that shattered crania. Walls were toppled and roofs torn down. This horror was heralded by around a century of substantial local sea level fluctuations – a clear sign of geological activity, if the inhabitants had only known.

The intact appearance of the town today, and even the pitiful scene in the ‘room of the little weaving girl’, are products of the occasionally overzealous restoration in the 1930s. By stripping this, and the mythology, away, Wallace-Hadrill provides a vivid and enthralling glimpse of everyday Roman urban life. This book will fascinate anyone interested in Vesuvian archaeology, town life, or the Roman world.