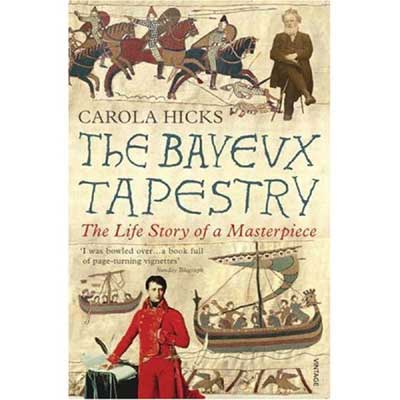 The most familiar image in the gallery of the mind’s eye is how Carola Hicks describes The Bayeux Tapestry in her book, subtitled ‘the life story of a masterpiece’. She also notes The Times’s 1944 characterisation of the Tapestry as a great Norman newsreel that anticipated the invention of Technicolor, and noted its descent from that film in stone, Trajan’s column.

Indeed cinematic analysis works well on the Bayeux Tapestry: it can be dissected in terms of mise-en-scène (scene-setting), montages, tracking and plot. The tapestry can also be viewed as a dessin animédiévale – an historical strip cartoon – a term was coined by Marie-Thérèse Poncet in her 1951 Sorbonne dissertation on the subject.

Dr Hicks produces numerous equally entertaining vignettes in her story of the afterlife of this, one of the great works of medieval art. She deals with the tapestry’s neglect until the 19th century, when the Society of Antiquaries paid for Charles Stothard’s superb drawings, and considers the desire of tyrants as different as Napoleon and Himmler to possess it – outlining a miraculous series of escapes from serious damage or destruction. She chronicles its impact on art, from Picasso’s Guernica, to Guinness advertisements. This Dr Hicks lovingly presents in terms of a biographical format – parentage, conception and birth…cliffhanging adventures..shifting reputation, many offspring, set against the wider background of the times.

She summarises the content, composition and manufacture of the Tapestry, and produces a new candidate for its patron: Edith Godwinson, widow of Edward the Confessor, sister of King Harold II, friend of William the Conqueror. Edith had, Hicks argues, the motive, the means, and the method to create this masterpiece of English embroidery which ended up, for reasons unknown, in a small Norman town.