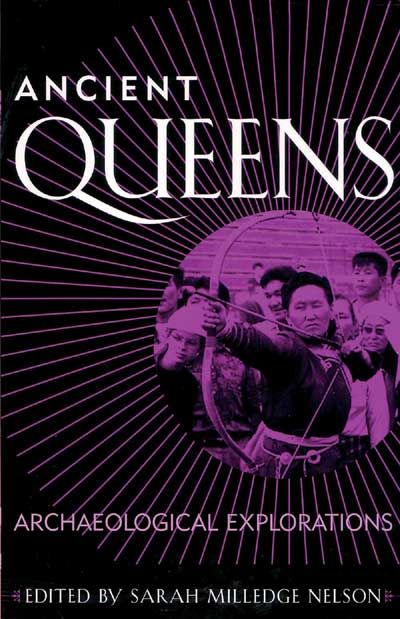 Ancient Queens, Archaeological Explorations
Ed. Sarah Milledge Nelson, AltaMira Press, £24.95
Do you know much about the women who ruled in antiquity? As Sarah Milledge Nelson, Professor of Archaeology at Denver points out, most of us do not …’presumably because of a cultural expectation that rulers will be men’.
Nelson’s edited collection of ten papers on ancient queens, largely written by women academics and published within a series on gender archaeology, aims to redress that imbalance. And the above quotation reflects well the feminist anthropological approach of the book, with its carefully considerate interpretations and language (lest too much modern, western, male-orientated cultural baggage be loaded on the past).
For some readers, the book may be too politically correct, too academic – with its continual bibliographic references and anthropological lingo, and perhaps too theoretical. But for others, the book provides refreshing and considered discussions of ancient female rulers – women that are often otherwise forgotten or ignored, even by the very people who study the past. And that is the reason why this book was produced.
Although in no way exhaustive – England’s famous Boudica is missing from the line-up – it does make for an illuminating read and highlights queens from around the globe, including China, Peru and Mongolia. Of particular interest is the essay about the role of Egyptian queens in antiquity. Here, (again in true anthro-language) we learn that in Egypt, the kingship was an ‘androgynous construct’; that is an invented role into which men or women could fit. Perhaps the best known example of such regal gender ambiguity comes in the form of Queen Hatshepsut, a particularly powerful queen who ruled Egypt from about 1478-1458 BC, and who took on all the signs of kingship – including the titles and the masculine appearance of a king replete with false Pharaonic beard, while retaining her feminine identity.
If you want your cultural assumptions challenged, your gender constructs illuminated, or simply want to know more about a myriad of ancient female rulers, many of whom have been typically overlooked, this book is for you.